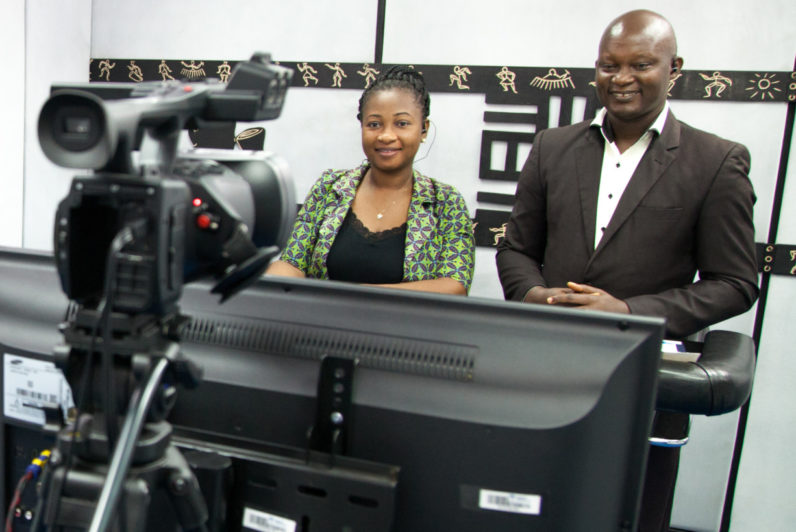 As a tech journalist I get approached every day by hordes of start-ups vying for attention, so I find myself becoming rather jaded. Things that 20 years ago would have been regarded as miracles simply don’t impress me much these days.

But what if – instead of focusing on the latest incremental innovation that could make our bloated western existence even more ludicrously comfortable – we took a big step back and looked at how technology could really “make the world a better place?”  (Yeah, try saying it without the Silicon Valley sarcasm.)

Can existing technology be applied – without any grand crazy schemes or oodles of cash – to make a real, immediate impact to things that matter, such as bringing quality education to millions of young Africans? As it turns out, it already is.

Akroso, in Ghana, is much too small to be called a town. A Google Maps search brings up a single road and 4 landmarks. Apart from the church and the health centre, there’s a remittance service based at a local street market stall, plus the school where Ntiamoah Okoto Prince is a teacher.

Prince’s students don’t have computers or tablets, and they’ve never been on a Virtual Reality fieldtrip. They share plain wooden desks, read tatty textbooks and take notes from the chalk-written blackboard. Yet they are part of a technology revolution nevertheless.

Up until recently, the children of Akroso Salvation Army JHS were taught in the traditional way predominant throughout the African education system – sitting quietly and learning by route. Teachers had no confidence to elaborate their lesson plans, as many of them lacked basic pedagogical training. In Ghana alone, almost 63,000 teachers remain untrained, nearly half of the entire education workforce in the country. Even with ample resources, the logistics of tackling this problem would be extremely challenging, but as we’re dealing with one of the poorest regions on the planet, that challenge becomes monumental.

The Varkey Foundation is a not-for-profit organization that looks at ways of tackling such challenges. Its aim is to improve standards of education for students like 16-year-old Abidi Solomon, who enthusiastically recounts how she now actively participates in her lessons, not only learning the texts, but discussing them in groups with her peers and teachers. That change was brought about by the Foundation’s Train For Tomorrow, a $2 million project funded by Dubai Cares that delivers long-distance interactive video training to teachers across the region. Through a solar-powered video link two ‘master trainers’ simultaneously teach many educators dispersed across remote areas of the country. These newly trained teachers in turn share their knowledge with the other staff in their school. This creates a ripple effect, so that minimum resources, the impact of that knowledge sharing is amplified exponentially. In other words, it’s viral content with a purpose.

The impact of that change for pupils like Abidi is tangible according to Angela Obeng, Girl Child Coordinator at Birim Central Municipality:

“It’s specially important for girls,” she says “They become more vocal as the new system encourages them to get involved. Students feel like they’re making a contribution, the teacher is interested in what they’re saying, so learning becomes more interesting.”

The project was inspired by an earlier initiative funded by the UK Department of International Development called Making Ghanaian Girls Great (MGCubed for short) which also used solar-powered computers and projectors to broadcast literacy and numeracy lessons into deprived and isolated areas, as well as after-school activities to teach girls about issues such as early pregnancy, early marriage, girls’ rights, and financial literacy. The results improved not only the girl’s overall scores, but also increased attendance from 54 to 80 percent.

Head Teacher Edward Badu Ramson, explains how students in Akroso are even using Facebook-style mechanisms to give feedback on their lessons and make the process more interactive.

This conversation also spreads horizontally to encourage student-to-student interaction and peer-based learning, where pupils are tasked with learning about a subject, and then communicating that knowledge to other students.

That pedagogical best practice has been applied by companies such as Google in their own EdTech endeavours. I recently spoke to Jennifer Holland, Program Manager at Google Apps for Education about their roll-out of Expeditions, a programme that uses Google Cardboard to take students on Virtual Reality field trips. She tells me that engagement was significantly enhanced as soon as teachers assigned students ‘expert’ status and allowed them to guide their peers through the VR lesson:

“When a student is empowered to become an expert, they become excited, and learning happens organically, so much so that they don’t even realise they’re learning!” says Holland.

As Malala Yousafzai’s high-profile campaign highlighted, girl’s education is not only a universal right we need to strive for in the name of equality, but also critical in achieving other development objectives, as it helps break the cycle of poverty. Educated women are less likely to be forced into marriages against their will, marry early or die in childbirth. Their own children are also much more likely to be healthy and go to school themselves.

The beauty of this model is that it uses existing, proven and relatively cheap technology in an inherently scalable way. If the pilot proves successful in its objective of training around 5,000 Ghanaian teachers over the next two years, it could then be replicated to other countries, helping sub-Saharan Africa tackle its widespread teacher shortage, which means over 2.7 million extra teachers are already needed in the region today to educate it’s booming school-age population. Globally, if we are to meet development targets of providing a every child with a primary school education, we need to recruit and train 25.8 million school teachers by 2030. As it turns out, there’s plenty of world left for technology to change, but perhaps we ought to put a little bit less work in trying to invent ‘the next new big thing’ and make the best of what’s already out there.

Read next: Can AI break down the echo chambers separating VC’s and Entrepreneurs?