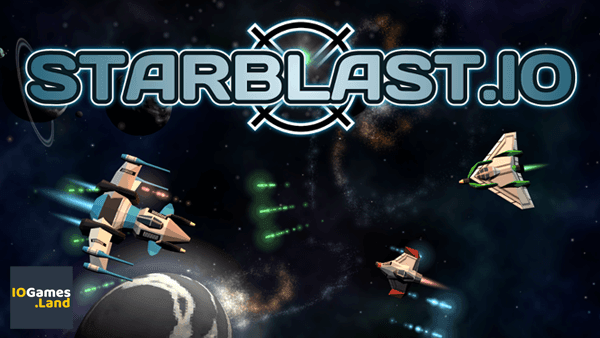 I grew up playing some great games. Games like Monkey Island, Red Alert, Duke Nuke’em and so many spaceship games I have lost count. My love of gaming never died but the amount of free time I have to enjoy games has certainly dwindled. Luckily, the new blast of multiplayer web-based games dubbed “io games”, has been allowing me to enjoy this rather frivolous past time once again.

One game that has really caught my attention is http://starblast.io.

Starblast.io is a modern take on the classic arcade-style space shooter. You start as a pretty defenceless mining spaceship in a Galaxy littered with powerful destroyers, all looking for an easy target and asteroids to mine. Your goal is to mine the asteroids for gems using your lasers. Collecting gems earns you experience points, which in turn allow you to level up. And as with most games, levelling up grants you points to spend on upgrades.

You can level up almost every aspect of your ship and even chose new ship classes. After a few minutes of mining and shooting other players, you can create a pretty awesome ship. Eventually, you end up in a massive battle vs other highly levelled players.

If you loved playing Diep.io, you could easily get lost playing this game over and over again as you try to figure out the best way to level up and explore all the different ways to gain the most experience, quickly.

The gameplay is incredibly smooth and the whole game feels very polished. Even though the game is described here a classic arcade-style game, the graphics aren’t retro. There is a pseudo-3D feel to the graphics and the effects really help add to the immersion of the game.

All in all, I love this game. It certainly appeals to a slightly older audience than Mope.io and Moomoo.io, which is a good thing. You can enjoy the game without lots of kids ganging up on you. Give the game a try and let me know what you think.

Read next: How to Unlock LG G6 to work with any Network