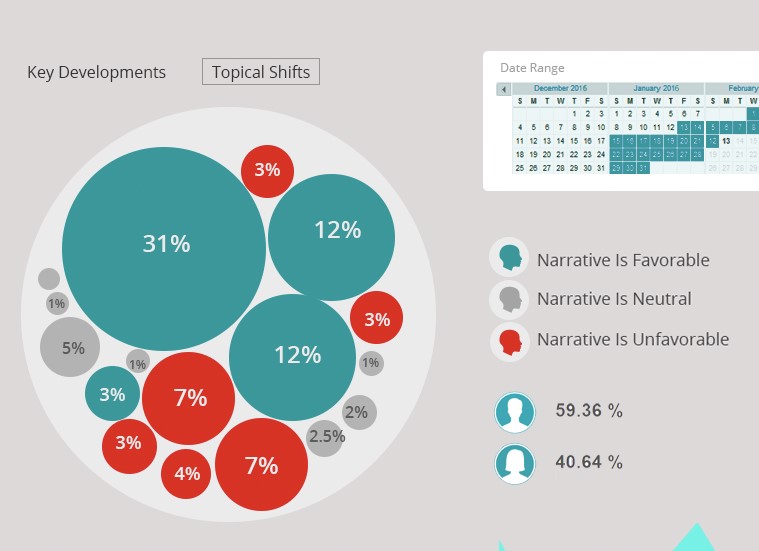 2016 was dominated by stories about virtual reality and augmented reality. However, the undeniable trends this year are around advances in artificial intelligence and machine learning that are both transforming customer experiences.

Sophisticated analytics now make it possible to send the right message to the right device at the exact right time, all in the name of progress. Only a few years ago, the customer journey involved businesses presenting contrived stories to their audience, but its consumers own personal stories that are now creating the real value.

Step forward, Protagonist, the analytics company that was formerly known as Monitor 360. The new Protagonist platform takes a unique stance by using natural language processing and machine learning to deliver meaningful Narrative Analytics. Could a focus on the genuine beliefs of a consumer unlock the motivations behind their behavior?

Brands are at their most powerful and resilient when they can tap into the deep beliefs that motivate their audiences – Doug Randall, CEO of Protagonist

The Protagonist platform moves away from traditional customer surveys or even the relatively new measurement of social media analysis. By incorporating thousands of data points and specially tailored considerations, the company believes they can measure the impact of contemporary narratives.

Technology is now enabling marketers to understand the meaning behind user-generated stories. The digital revolution has placed the consumer rather than the brand into the spotlight, and this is a concept that businesses are only just beginning to comprehend.

The digital revolution has changed everything and Millennials are already starting their day by checking Snapchat stories that are told in chronological order rather than the algorithmic feeds of a Facebook timeline.

There is an argument that we have always been a global community of storytellers. Our ancestors moved from town to town gathering in groups to share their experiences and build friendships. Thousands of years later we are gathering around virtual campfires and building digital tribes.

Make no mistake, stories now dominate the digital airwaves, but grasping the meaning behind them is an incredibly complicated affair. Protagonist has appeared at a time where understanding stories rather than creating them is considered overwhelming for businesses.

Protagonist work with some of the most influential global companies in the world with clients such as Warner Brothers and Microsoft. But Doug Randall, CEO of Protagonist advised:

what we’ve found isn’t that our clients are powerless or totally beholden to whichever perceptions happen to exist about them at the moment. Rather, we found that by understanding the narratives about themselves as well as deeper narratives informing society as a whole, our clients could be active participants in those conversations.

Robert Carroll from Protagonist recently appeared on my podcast to discuss the platform’s launch along with the Narrative Subscription and Playbook capabilities. Carroll also talked about his personal story and how marketers can now act on information, not intuition.

Despite initial concern about the capabilities of machine learning, leaders are waking up to the power of leveraging the information hidden inside every shared article, Twitter feed, Facebook or Reddit post from each of their customers. However, it’s the combination of human expertise with social and data science that is enabling the team at Protagonist to deliver beliefs at scale.

Only time will tell if harnessing narratives can help businesses build and empower brand reputations or launch new products. But, anything that stops referring human beings as clicks and page views is certainly a step in the right direction.

Read next: SlideShare Shuts Down Lead Gen - What Does it Mean