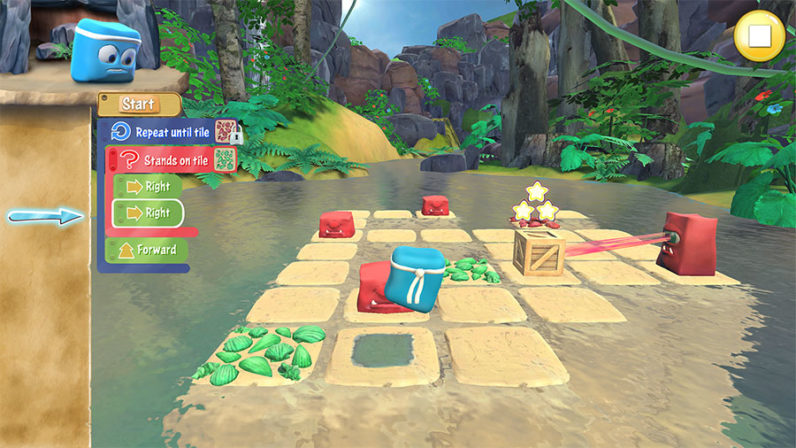 As technology advances and industry becomes “smarter”, the need for programmers will continue to grow. We’ve already started seeing the demand over the past 20 years, and it will only continue to become more lucrative as businesses look for coders to accomplish a variety of jobs and to hold valuable positions.

The importance of programming has not been lost on those in power either, with President Obama even believing coding should be mandatory in US school systems. While having programming as a mandatory study in school would be tremendously beneficial, giving children alternate ways of learning to code is a great way to bolster interest and creativity for the next generation of the workforce.

The team over at Radiant Games feels the same way and has released an app for iOS that promises to teach children the basics of coding through fun, interactive quests. We had a chance to sit down and talk with them about Box Island, the coding adventure for kids, so make sure to check it out below!

Care to introduce yourself and your role at Radiant Games/Box Island?

I’m Vignir Gudmundsson, CEO and co-founder at Radiant Games. My background is in mathematics and computer science. Our mission at Radiant Games is to create high-quality coding experiences that get into the hands of millions of kids around the world. My main role is to focus our efforts towards finding ways to achieve exactly that. Box Island is our first building block in that journey.

What inspired the creation of Box Island?

It all originated from a group of individuals that had one clear thing in common. We all got introduced to computer science much later in our lifetime then we would’ve wished for. We were driven to understand why that was the case and how we could contribute to eliminating the friction that we experienced when we first saw coding. We essentially wanted to create the coding games we would have loved to play when we were younger.

In just a couple sentences, what is Box Island?

Box Island is a mobile game that takes boys and girls on an exciting adventure, while teaching the fundamentals of coding. Kids apply the basics of algorithms, pattern recognition, sequences, loops and conditionals to progress through super fun and challenging gameplay.

I see on your website that a version for schools is being developed, what will that version entail?

Why do you feel that it’s important that kids start learning coding early?

I think it’s unfair to kids if we don’t give them the opportunity to learn computer science from an early age. Getting kids interested in coding isn’t just about jobs or foreseeable economic changes. It’s about understanding how the world around us works. The thing is that most people do not understand how to get computers to do new and original things. Yet, they are everywhere and we use them for practically everything.

How does the pricing structure work?

Box Island currently features 100 levels, where the first 10 levels are free to play before users can select between multiple coder profiles that unlock continuing parts of the game. The full game is $7.99.

Thanks for taking the time to answer some questions, anything you’d like to close with?

Thank you as well!

While it’s never too late to learn to code, children have a much easier time retaining information, so what better time to start then when they’re young? Giving children a fun, interactive way of learning helps in retention and interest by gamifying the process through the use of missions and bright, engaging colors.

Box Island offers all of these things and more with their coding game and is even taking it a step further by developing a version meant for schools that will allow for licensing and a way for teachers to keep up with the progress of their students.

We’d like to thank Vignir of Radiant Games for taking the time to answer some of our questions. Box Island is currently available for iOS.

Read next: Startup investing is changing - here's one of the people responsible for it