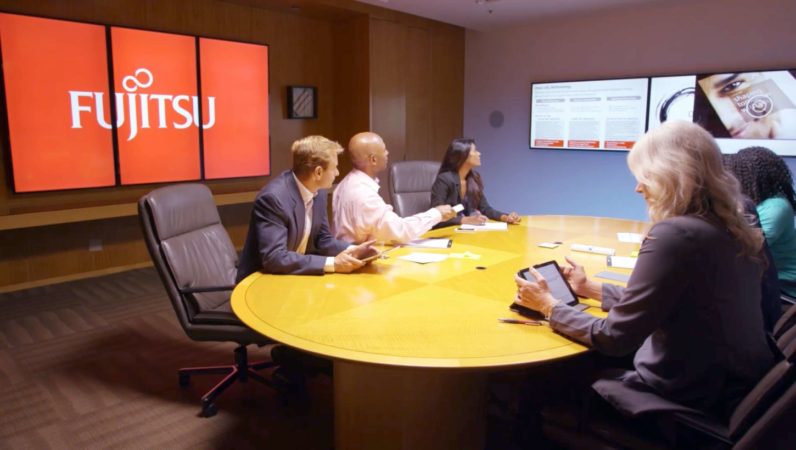 The gesture-based screen manipulation technology used by Tom Cruise in the film, “Minority Report,” is being introduced to the modern day workplace. The CEO of Oblong Industries and former science advisor to Steven Speilberg aims to transform collaboration with Oblong’s Mezzanine 360-degree visual immersion technology.

The addition of high-profile clients such as Accenture, Boeing, NTT, NASA Aeronautics, Sarah Cannon, and IBM has helped Oblong Industries achieve a 50+% growth in revenue year-over-year. Being recognized by Gartner as a Cool Vendor this year also firmly placed this technology on CEO’s wishlists across the globe.

Fujitsu, the world’s fifth largest IT provider, currently uses Oblong’s Mezzanine technology to help employees interact in an entirely new, immersive way. After creating the Open Innovation Gateway (OIG) back in 2015, the tech giant is leading the way by implementing innovative practices.

Encouraging the collaboration between thought-leaders from multiple industries is becoming a new breeding ground for social innovation. But, more importantly, there is a focus on delivering business growth too.

There is an increasing realization that the old way of doing things is simply not fit for this digital age. Anyone who has sat through several meetings this week, desperately trying to maintain their focus will admit that most meeting rooms are in dire need of a 21st-century upgrade.

Having one person chairing a meeting while the stronger personalities take over leaving everyone else nodding in the right places is far from productive. When thinking of Video conferencing, it typically conjures up images of merely being able to see the other person. But it does not allow you to share the same space with the individual. You cannot look at documents together, but the Mezzanine system is finally removing the blurred lines between physical and digital documents.

Maybe, it’s time for technology to step up and unite workers by giving every person in a meeting room a voice. Although, this might sound a little idealistic, make no mistake, more and more businesses are already leveraging technology to change their office culture to obtain a competitive advantage over their out of touch competitors.

TheMezzanine system has its sights set on becoming the future of human interaction in a corporate environment by transforming the way we communicate and collaborate.

Fujitsu is already reaping the benefits of embracing technology to help drive digital transformation and innovation. Maybe, it’s time for all businesses to start thinking differently. The fresh approach and rethinking of how we work with colleagues in multiple locations is providing a vision of a much more productive meeting room and the entire organization.

Unsurprisingly, Oblong Industries announced a $65 Million investment round in October. Innovative workplace solutions for the 21st century are no longer just a bunch of meaningless buzzwords. With a strong foothold across a wide range of industries such as government, education, and healthcare, it certainly feels like there is a wind of change in the air.

After installing custom solutions to their flagship product Mezzanine, early adopting companies are now able to visualize data and link international teams, global assets, and content in a more visual, engaging, and collaborative way. Could businesses that fail to adapt to this new way of working find themselves getting left behind?

The most exciting aspect of these advances in technology is that what was once deemed as just another Tom Cruise science-fiction movie has now become the future of our work.

On my podcast, I spoke to Dave Marvit, Fujitsu’s Innovation Strategist and Mohi Ahmed, Director of Open Innovation Gateway. We talked about how the company is using Oblong’s 360-degree visual technology and why it’s so beneficial particularly for telecommuters.