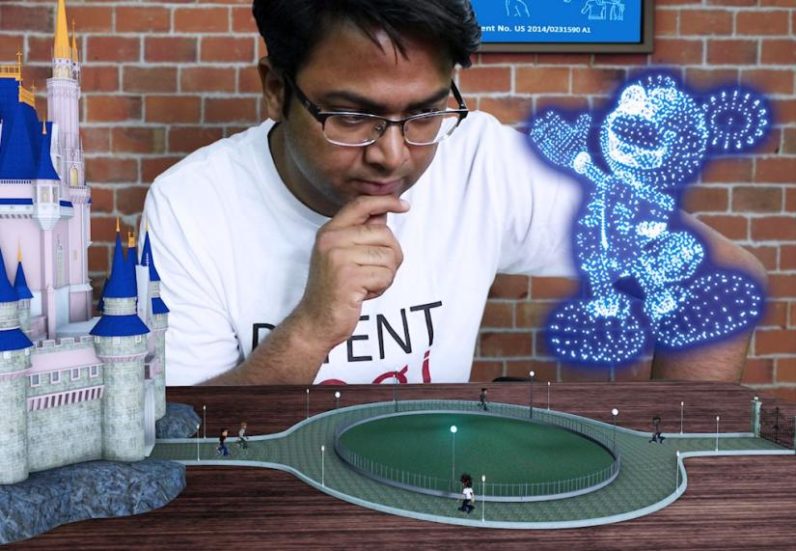 They also have a unique airbag for drones to keep the audience safe from crashing drones.

To most of us, Disney seems to be just an entertainment company. Which is true to some extent, but at the core, Disney has always been one of the most innovative technology company. This innovation culture was started by Walt Disney himself. He invented and patented the first multi-plane camera that allowed him to produce feature length movies.

At PatentYogi, we have been tracking patents filed by Disney for over 4 years now. We have discovered many cool patents from Disney that describe how Disney plans to use drones at Disneyland. It is pretty awesome!

For one group of inventors at Disney, they didn’t have to look far for creative inspiration. Disney being the epitome of fantasy, all they had to do was pull out a leaf of the Disney movie –“The Princess and the Frog”. It’s the scene where ray the firefly and thousands of his buddies put up a spectacular air dance while leading frogs to Mama Odie.

Disney has patented technology that puts up a similar air dance in reality. The invention creates amazing displays in the real world by using hundreds of drones carrying lights that mimic the fireflies. The patented technology takes in a description of the visual display as an input and converts it into flight paths for all the individual drones. These flight plans are then relayed from a ground station to the drones. The drones then perform in-flight calculations based on wind conditions and update the flight plans. The drones receive these flight plans and obediently follow them moving in complex trajectories. In effect, the drones act as light pixels that can be moved around in controlled paths to create a grand visual display for people watching from the ground.

Disney Imagineers have more tricks up their sleeves. Projection setup has largely remained same for over 100 years now. A static projector projects images on a static projection screen for the view of an audience.

Disney is about to change this in many ways. Drones will carry a projection screen above an audience. A projector from the ground will project images on the moving projection screen. This will allow Disney to move the screen to change the user’s experience. For example, the screen may move along with the character, or follow an object, like a football in a soccer game.

Another patent from Disney discloses a drone that carries projector along with projection screens. The drone’s screen would be held parallel to the ground, with the projector beaming an image onto its rear surface via a reflector. The screen would have enough translucency to allow park visitors to see the projection, which could consist of both still and moving images.

These systems provide new ways of radically expanding the palette of the aerial display.

A marionette is kind of a puppet controlled from above-using wires or strings. Marionettes are operated with the puppeteer by using a control bar.

Again, drones add an extra dimension to the art of puppetry. The marionettes can fly above an audience and also execute more complex movements. In a way, Disney is upgrading various art forms using technology.

Disney is using drones in a unique way. They are creating art using drones. Also, they are upgrading some old art forms like puppetry.
This is really cool.

However, drones can be quite dangerous, especially when used in areas with a lot of humans including kids. Disney could not have used drones in Disneyland before making drones foolproof. Disney has drawn inspiration from NASA’s airbag technology to softly land space crafts on distant planets

So they have invented an airbag, that encapsulates the drone if the drone malfunctions. The airbag inflates to cover the hard, sharp, and spinning parts of the drone. As a result, any impact of the drone is with the airbag rather than a hard or spinning drone component. The airbag also protects the drone from further damage.

So do go to Disneyland when they start using drones in their shows. They are going to be awesome and totally safe for the audience.

Read next: How to Tell If Someone has Blocked You on Facebook Messenger