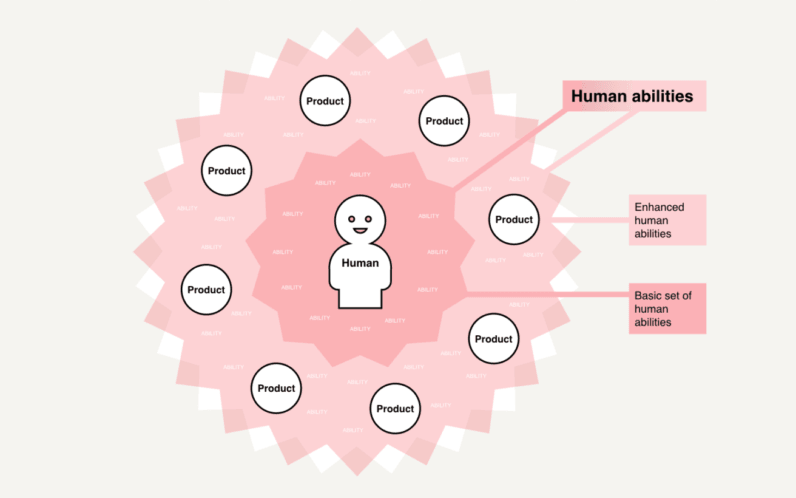 The role of design is consequently evolving. From initially being a domain of communication with a predominant aesthetic focus design has taken a key role in the creation of products and has become a human advocacy. Design has moved into the C-Suite with the appointment of Chief Design Officers (CDO). Design Thinking shifted the focus from technical to human solutions by advocating human-centrism.

The idea to design for humans seems highly logical and easy to grasp. Everyone gets that, it’s about the human, it’s about designing for people.

It is about ability. Human ability and how to meaningfully enhance it.

From human purpose to activity to ability and back

The aim of solving human problems serves as a human-centered articulation of design and product rationale. But what makes a problem a relevant human problem that is worth solving for? To answer that, let’s look a bit deeper into the core of human existence and its purpose.

Human life inherits a fundamental intent for its own maintenance. Human life’s maintenance as purpose results in human needs – the need to breathe, the need to eat, the need to reproduce, the need to communicate, and so forth. Unresolved human needs become human problems. Desire is the craving for a solution to a problem. A good solution is desirable and is executed via an activity. The execution of activity requires the ability to do so.

Ability allows for activity. Ability concerns purpose. Enhancing ability is expanding the human itself and is a property of life itself.

The products and tools (both physical and digital) that give us humans these abilities are in a way extensions of ourselves. Any task is a human task. Products address these tasks and help us carrying them out. Enhancement of human ability is the sole reason for a product’s or tool’s existence.

From human to superhuman

Human evolution is the adaptation and enhancement of human ability. The “original” human has a basic set of abilities. These abilities are both mental as well as physical in nature. Natural human evolution has enhanced these abilities to adapt to a constantly transforming environment.

I would not necessarily describe Human Ability Enhancing Design as a full-scale methodology. It rather refines and sharpens the human focus that Design Thinking and design as a discipline advocate.

Yet there are methods that can further enrich current design processes and can help design focus on enhancing human ability:

Products empower humans and enhance human ability. Designing with that premise is the key to connecting design to the deepest layers of human existence – to an almost spiritual domain. Products are extensions of the human solving human problems and allowing for human activity. If design articulates the deep connection of human ability to human purpose accordingly, the result can be an excessively delightful product experience – the Ultimate Delight.