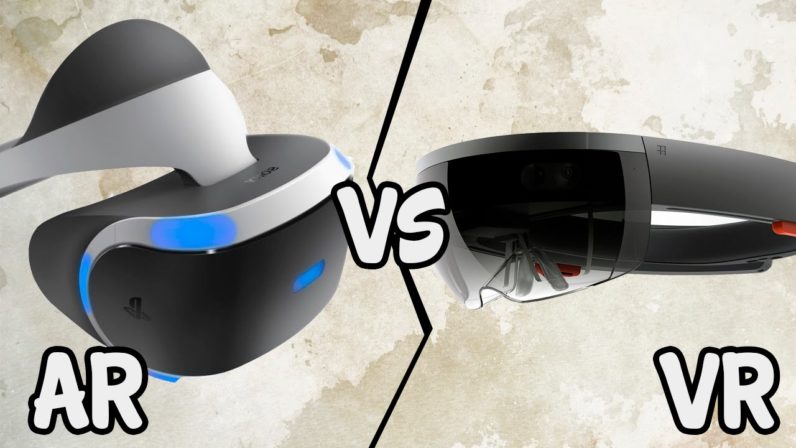 Joe air-taps Dan’s picture to video call him. Dan picks the call and appears, in front of Joe, Dan’s life-size hologram, floating in the air. In very Sci-fi style, Joe drags the hologram, rests it on a table and pins it.

The call wasn’t very different from a regular Skype video call, except it was taking place in Augmented Reality (AR) between Microsoft HoloLens, rather between PCs or Smartphones.

The Head Mounted Display (HMD) wore by Joe made the audience believe that he is about to demo some upcoming Virtual Reality (VR) tech by Microsoft. The demo ended in huge applause and gave the audience a sneak-peek what video calls in future will look like.

VR and AR are two futuristic technologies that are going to change the way we, humans, perceive technology. It’s natural of App developers to look at these technologies with great hope.

While AR technology has been in work for a long time now and is relatively a common place in mobile apps, today, the credit of reviving VR goes to 2012’ Kickstarted project “Oculus Rift: Step Into the Game” by then unknown startup Oculus. Facebook later acquired Oculus for $2 billion and inspired (perhaps forced) Google to make inroads to VR technology.

Google, rather than developing a standard PC-connected VR device like Oculus Rift, decided to leverage on the well-established it controls, which led us to Google Cardboard and, later, Daydream. Google’s setting involved a VR kit consist of a HMD and a smartphone. Google released three SDKs for developing apps for cardboard on various platforms: Android, Unity Gaming, and iOS.

The SDKs triggered the first set of VR applications developed for smartphones and the world hasn’t looked backwards since.

Cardboard’s successor Daydream, owing to only a handful of Daydream-ready phones and the VR headset Daydream View costing many times the cardboard, is far from a success. But it’s the only native VR SDK available for a mobile platform with Apple conspicuous by its absence in this field, bringing Facebook and Google on the verge of a VR supremacy war. In case you were wondering, unlike its predecessor, Daydream doesn’t support iOS, at least not yet.

Is it Apple vs Google again?

Both Google Tango and Apple ARKit look promising but are yet to reach their full potential. This might give rise to another platform war between the two tech giants. Apple ARKit supports every iPhone 6s and 7 out there and is a clear winner here. Google Tango at this stage supports a couple of handsets by Asus and Lenovo, neither Pixel-s nor Galaxy-ies.

Nevertheless, iOS and Android app developers determined to include either of the technologies in their upcoming apps in a pursuit of futureproofing them have a lot of paths to take at least when they are thinking AR.

Daydream may not look like an overly capable project Google hyped for after all; it’s the only feasible platform to develop VR apps on. There is no need to look elsewhere.

VR and AR can add value to any app regardless of its category. But how to choose between these two when developing an app or a GAME?

It’s hard to decide between the two when developing games. AR and VR both tend to blur the lines between real and virtual world. However, VR looks like the missing block in the games that are drawing up on ‘reality’. First Person Shooters (FPSs), today, are growing closer to reality with real life graphics, spine-chilling sound effects and, frantic animations. On top of that, FPSs increasingly include AI engines and physics engines to give a gamer a perception of reality. However, all the action take place in front of a screen placed at a distance from a viewer, which leads to substantial loss of quality by the time the images travels to the viewer’s eyes, broadening the gap between perception and reality.

In VR, the screen inside the HMD is placed directly on viewers eyes, giving the user a perception that he is not playing the game, but in it.

Spider-Man Homecoming VR Experience is a fun and thrilling first-person game if you have a capable PC and either an Oculus Rift or HTC Vive. Or else you can try VR Roller Coaster on Google Cardboard.

If your game needs to interact with the real-world locations (think Pokémon Go), AR is what you need. Otherwise, VR is the way to go.

For the reason described above, a piece of video content provided taken in 360-view is sure to leave your viewers awestruck. They can move around, revolve wearing the HMD and can actually see what is happening behind the action. VR doesn’t look like very great an option in this category of apps. Apple Developers looking at ARKit with great hope. Sorry!

The Skype call made on HoloLens I believe is the best rendition of Augmented Reality to date, not as a gimmick but as a technology that actually makes, otherwise, boring and dull video calls interesting and useful at the same time.

AR is suitable in case of Video Calling apps because you need to see the world on either side of the call. VR will cut you on your side of call. I am not saying VR is not happening in Video Calling at all but the HoloLens demo, suddenly, makes developing a standalone video calling apps so much sense.

Imagine interacting with the world around the person you’re on a call with, annotating objects of your interest and zooming them in and out while the call is still running and he is interacting with yours.