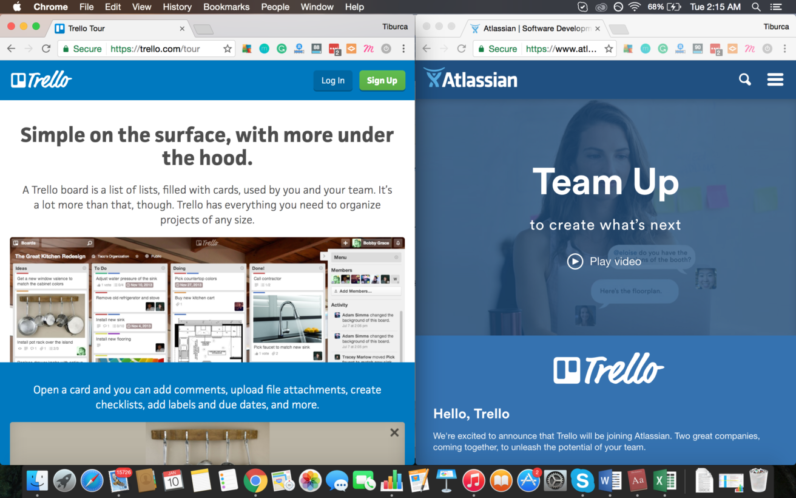 Australian based productivity software company Atlassian has selected Trello to help boost their business, which is already valued at $5 billion. The publicly traded company announced the merger early in the day on January 9, 2017. According to published reports and interviews with Atlassian’s president, Jay Simons, this is a step forward for both businesses that will not have a negative impact on Trello’s 19 million users. Instead, Trello is well-poised to become an even stronger version of the software that so many people love.

Understandably, Trello’s users are probably surprised and concerned by this announcement. However, Simons has indicated that every current employee of Trello will retain their position with the company. In other words, the people who made Trello what it is today will still be in place to help take the collaboration app to the next level. Furthermore, Simons has pledged not to make any drastic alterations to the app or the way Trello operates, and there are currently no plans to do anything that would alter the app or its branding. Therefore, if you use Trello on a regular basis, you can relax and look forward to a stronger, brighter future for the app.

Although Trello will remain a separate entity with its own identity and focus, this merger does present a good opportunity for both companies involved. After all, Atlassian and Trello have shared goals, including the desire to acquire 100 million users. The two apps are also commonly used by the same people. Bringing them under one umbrella will enable developers to ensure a stronger, more cohesive approach.

For example, Atlassian’s JIRA offers project management tools. Meanwhile, Trello makes project organization easier through collaboration tools. These two focal points are a natural extension of each other, and combining forces make it much more likely that both businesses will hit their goal of 100 million users.

What Does Atlassian Add to Trello?

Trello traces its roots back to the founding of Fog Creek Software in 1995. By 2011, Trello was a spin-off product with the vision of bringing the Kanban project management method to life in everyone’s palm. Kanban took the approach of using sticky notes on a whiteboard to a new level, so Trello enables users to do the same thing in the virtual world. Doing this makes organization and collaboration much easier because everyone can ensure they’re on the same page, even if they’re not actually in the same place.

Trello’s formula is beloved by its users, so it’s not surprising that Atlassian has no plans to dramatically alter anything. However, Atlassian does bring much to the table that should excite Trello users. This is because Atlassian has a net worth of $5 billion, which gives the company resources that Trello previously couldn’t tap into.

Trello has remained very modest since its founding in 2011 and has only raised $10.34 million in venture capital. Now that money is no longer going to be the same roadblock, Trello’s users can look forward to useful improvements. Atlassian’s president has stated that increased engineering resources will be made available to Trello’s team in order to boost the current product.

What Does Trello Add to Atlassian?

When a larger company merges with a smaller one, it’s often a way to either remove a competitor or absorb their technology. In this particular case, Atlassian clearly has no plans to get rid of Trello, nor is the collaboration app a direct competitor. What Trello offers is a popular app with a built-in base of loyal users from high profile companies such as Adobe, Pixar, and Google. That’s a market that Atlassian obviously wants a bigger piece of, and Simons believes that combining forces is the best way to make that happen.

What Will the Future Hold for this Merger?

Although nothing has been confirmed yet, it makes sense to speculate that the future of these two companies will include enhanced integration features that go beyond Trello’s existing Trello Sync for JIRA. This would be a solid way to encourage people to use Trello and JIRA together. Atlassian’s commitment to providing Trello with increased engineering resources is also likely to lead to refinements and additions that stay within the general scope and spirit of the original product.

Mergers are typically nerve-wracking for everyone involved, but all signs indicate that Atlassian and Trello are a natural match. This should be a positive thing for users of Trello and JIRA, and both companies stand to attract an even larger user base as their products become easier to use together.

Atlassian’s acquisition of Trello appears to be a good thing for users and the employees of both companies. Atlassian’s decision to keep Trello separate is also a wise one. After all, Trello and other team management tools are becoming increasingly popular. Small teams often prefer to work with multiple specialized tools that let them focus on one task as opposed to complex software that offers an “all in one” approach.

For instance, companies such as Toggl and Teamweek fill very specific niches rather than trying to fulfill any needs a team may have. Keeping Trello in this category will make small teams happy. At the same time, the combined power of Trello and JIRA will attract larger teams. Ultimately, this merger is poised to be a win-win for everyone.

Read next: 4 E-Commerce Brands that Have Turned Customer Service into a Priceless Asset