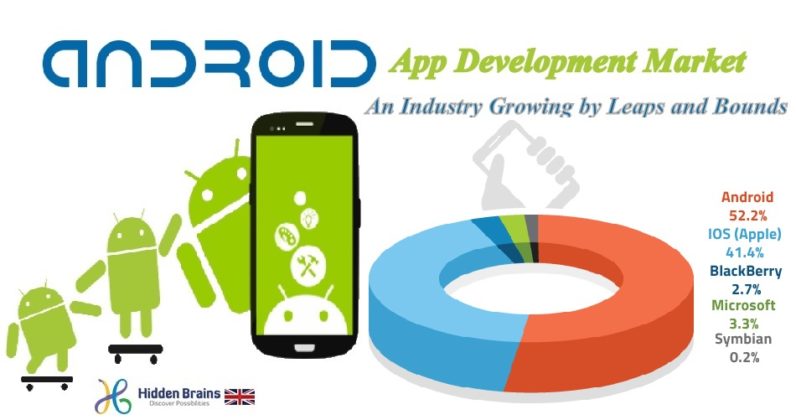 Android app development is in great demand considering the increased adoption of Google powered Android devices by people. How fast is this market growing?

In the age powered by smartphones, mobile apps have become the lifeline without which our daily routine gets disturbed.  Be it ordering groceries for day-to-day use, teaching kids in fun and interactive way, to booking a cab for commute, we rely on apps for anything to everything.

iOS and Android are major operating systems ruling the world of apps. Apple Inc. is responsible for approval and deployment of apps in the App Store, while technology giant Google is the Godfather to approach for launching mobile apps in the Play Store.

Large Customer Base and Popularity

Taking above graph as a legitimate reference, it can be conveniently said that Google is the major shareholder in the app market. This factor can be blamed for its popularity among developers and app development companies.

Google, being much known and acquainted to all, makes developers feel comfortable to build an app for Android platform. Further, the number of users registered on the Google Play Store itself is the biggest motivation for developers to create and launch an app, being rest assured that the app deployed on the biggest platform will be exposed to maximum number of people.

Android, being an open source platform, is preferred by developers to build apps. It does not require them to learn any special skills for developing an app. Writing an altogether new code for app from scratch and even optimizing or revising it for improved performance is easier.

Android software development kit provides a favorable environment for developers to write and manipulate code as per their requirements.

Easy to use Android SDK is mastered by several developers who charge quite reasonable for your app development project. In addition to that, market is not short of developers looking forward to grow their career in android development, which makes it simple for you to hire Android developers.

Android platform enjoys maximum user base, which is why you can surely find your target audience here. If you fall into the category of those who want to come up with something out-of-the-box but fear to go ahead with the idea thinking of whether it will be accepted by audience, worry not as with majority of people active on this platform, you would surely find set of people that support your idea or concept.

The reasons behind the growth of Android App Development industry are clear with above mentioned pointers. There is no more looking back for those who have an app idea ready for it to be developed and deployed on the largest platform to start earning from it.

Read next: Stock Market and P2P Investing in 2025 thanks to FinTech