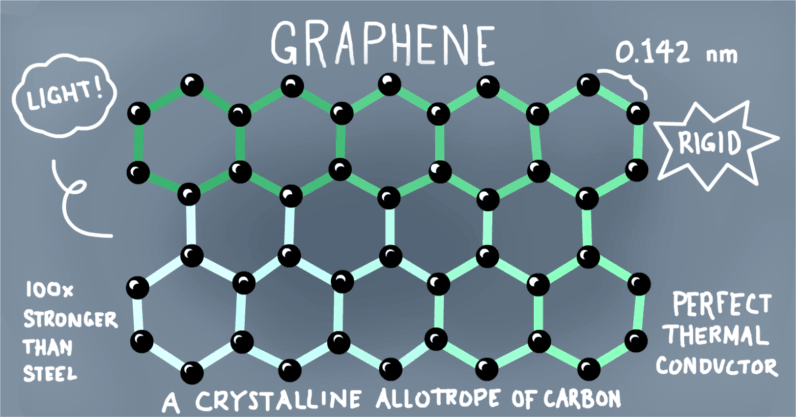 Since its discovery in 2004, graphene has caused huge waves amongst scientists, earning it the title of Wonder Material that many believe is capable of changing the world more than any textile since plastic. In case you need a refresher on what graphene is, here’s the short version: a million times thinner than paper, stronger than diamond, and as flexible as Gumby, graphene is a single atom layer of carbon arranged in a hexagonal pattern. The world’s first two-dimensional material, graphene is not only slim, strong and flexible, but also more conductive than copper.

Armed with such an impressive array of physical properties, it didn’t take long for graphene to take top prizes, including the Nobel Prize in Physics, which was awarded to its creator, Sir Andre Geim, in 2010. Since its discovery, engineers have envisioned plenty of ways graphene could revolutionize production processes across a wide array of industries, leading to more than 25,000 patents filed. From optic computer chips to wearable tech, graphene is leading research and development for technology of the future. But skeptics can’t help but ask, if graphene is so great, how could we haven’t seen more applications come to fruition over the past decade? While graphene sounds amazing in theory, does its practical abilities live up to its hype?

While many of graphene’s purported world-changing applications are still in the R&D phase, here are three ways the wonder material is already proving that the hype is well-deserved. As the production of graphene continues to drop in price as new techniques are discovered, we can expect to see even more applications come to fruition in the near future.

Sports companies have taken note of graphene’s lightweight, flexible and durable properties, making it an ideal substance to use as a composite material in athletic equipment. Racquet company Head recognized the particular appeal of graphene for tennis, launching the Graphene XT Prestige racquet, which uses the world’s strongest and lightest material to enhance the weight distribution from handle to head. Replacing carbon fiber and titanium alloy in the frame construction, Head’s graphene racquets are up to 20% lighter than conventional racquets with the same swing weight. This means players have a faster racquet behind the ball but with the same feeling of resistance.

Head has also utilized graphene in a new line of skis that replace some of the traditional wood and fiberglass with graphene. By increasing the titanal layers, the skis are stiffer yet more flexible—perfect for shredding powder. Meanwhile the Spanish cycling company Catlike has also put graphene to good use with its new line of helmets. Designed with graphene nanofibers in the roll cage, the Catlike Mixino helmets are a big step up over previous polycarbonate versions. Not only are these helmets lighter and stronger, but they’re also better ventilated, thanks to graphene’s unique heat transfer capabilities. There’s even a new fishing rod on the market that uses tiny rolled tubes of graphene to create a super flexible, strong rod with superior casting abilities. In the future we can expect to see graphene finding even more applications in sports that use equipment that must withstand and absorb significant impact, such as hockey and baseball.

Combining an atomically thin graphene filament with a computer chip led scientists last year to create the world’s thinnest light bulb. This is a huge feat, as light bulbs have never been able to combine with computer chips because the high heat needed to produce light has damaged the chips. However, graphene’s unique property of becoming a bad conductor at high heats allows it to transmit light without damaging the attached chip. This breakthrough will also come in handy for the future of computer chips.

These light bulbs have lower production costs, lower emissions, and a longer lifetime than LED competitors. Produced by  BGT Materials as a partnership with the National Graphene Institute at the University of Manchester, this past spring the first shipment of graphene light bulbs switched on in the U.K. BGT estimates sales will reach 300,000 to 500,000 this year, and as they become more widely available, graphene light bulbs will be a huge disruptor to the LED market.

One of the biggest ways we can expect graphene to transform the electronics market is in the smartphone and tablet market. Graphene is currently being used as a coating to strengthen the screens of smartphones, protecting them from shattering much more effectively than glass. Even more revolutionary, we’ll soon see bendable smartphones on the market. Chinese based startup Moxi Group has developed a smartphone that is flexible enough to be worn as a bracelet, or used flat like a traditional phone. While Moxi plans to sell 10,000 units in China this year, the early version still has to work out a few design kinks. The first generation will only have black and white e-ink screens. While the novelty of wearing your phone on your wrist is cutting edge, the design is still a long way from the sleekness of an iPhone.

The race is on for larger companies, including Apple and Samsung, to unveil their own bendable smartphone tech. The winner will be the company that figures out how to integrate graphene’s unique physical properties with the high computing power we’ve become accustomed to in our phones. No matter who comes out first in the race, we can expect to see graphene featured prominently in the technology. After all, it is the thinnest, strongest, most flexible substance known to mankind.

Read next: 3 Scientifically Proven Ways to Turbocharge Your Productivity