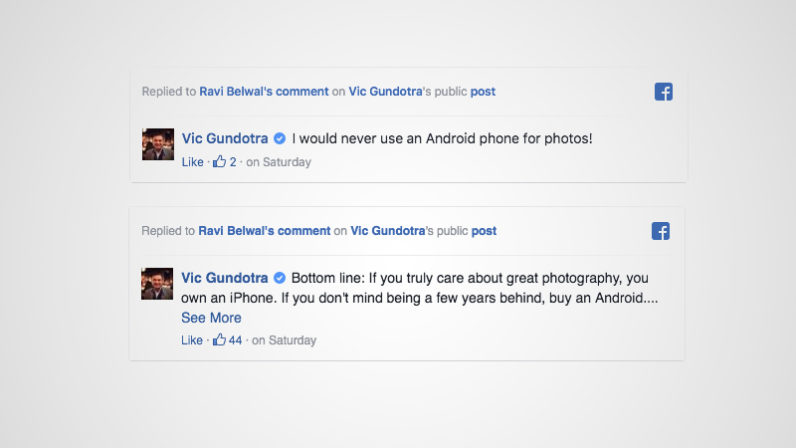 Jealous that your flashy new smartphone still struggles to capture photos as stunning as the iPhone? Android might be to blame… or so says a former Google executive who once headed the company’s overall mobile efforts.

This weekend Vic Gundotra, who is widely considered to be the man behind Google Plus, took to Facebook to ponder over the nascent demise of DSLR photography and the hulking cameras that come along with it.

Sharing two gorgeous images of his children that he snapped over dinner with his iPhone 7 Plus, the ex-Googler took a moment to laud Apple for its excellent Portrait mode.

The end of the DSLR for most people has already arrived. I left my professional camera at home and took these shots at…

“I left my professional camera at home and took these shots at dinner with my iPhone 7 using computational photography,” Gundotra remarked. “Hard not to call these results (in a restaurant, taken on a mobile phone with no flash) stunning.”

The post immediately garnered the attention of smartphone photography enthusiasts and soon numerous commenters were flocking to offer counterpoints.

“Indeed the [death of the DSLR] era has arrived,” one user noted. “[A]nd Samsung S8 even does a better job as compared to [the iPhone 7.]”

This is when the former Google exec dropped the bomb:

Asked to elaborate over his argument, Gundotra penned a lengthy reply detailing what he believes is the reason Android phones still lag behind the iPhone when it comes to image quality.

“Here is the problem,” he began. “It’s Android.” This is what the rest of his answer read:

Android is an open source (mostly) operating system that has to be neutral to all parties. This sounds good until you get into the details. Ever wonder why a Samsung phone has a confused and bewildering array of photo-options? Should I use the Samsung Camera? Or the Android Camera? Samsung gallery or Google Photos?

It’s because when Samsung innovates with the underlying hardware (like a better camera) they have to convince Google to allow that innovation to be surfaced to other applications via the appropriate API. That can take YEARS.

Also the greatest innovation isn’t even happening at the hardware level – it’s happening at the computational photography level. (Google was crushing this 5 years ago – they had had “auto awesome” that used AI techniques to automatically remove wrinkles, whiten teeth, add vignetting, etc… but recently Google has fallen back).

Apple doesn’t have all these constraints. They innovate in the underlying hardware, and just simply update the software with their latest innovations (like portrait mode) and ship it.

Bottom line: If you truly care about great photography, you own an iPhone. If you don’t mind being a few years behind, buy an Android.

Despite bringing up some valid points, it’s difficult to ignore the remarkable progress Android devices have achieved over the past few years when it comes to photography and overall camera capabilities.

In fact, tech critics across the board seem to agree that Google’s Pixel slightly edges out the iPhone 7 Plus in the camera department. I mean, take a look at this dazzling pic The Verge’s Vlad Savov took with the Pixel:

Disclaimer: According to reports from Recode, Gundotra is currently developing a third-party health tech wearable for the Apple Watch.

Read next: JavaScript developers are competing to build games in under 13kb