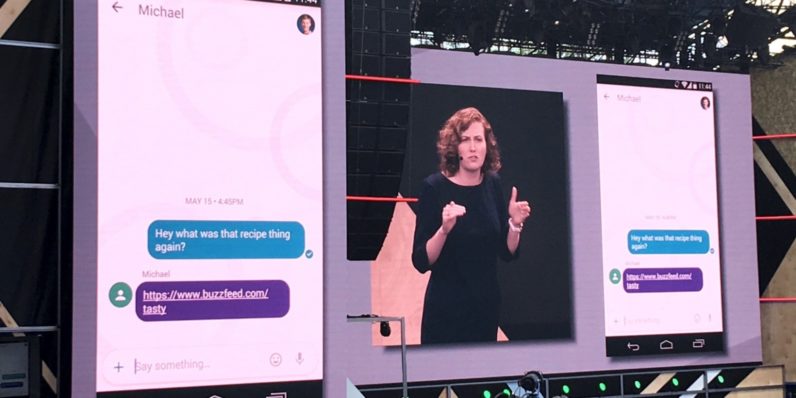 One of the most-talked about announcements at last year’s Google I/O is now available for some Android users.

Android Instant Apps act as a sort of bridge between web apps and native Android applications by allowing users to run specific parts of applications without needing to install the whole thing. Ellie Powers, Google’s Group Project Manager, took to the stage last May at I/O to give us a taste of how it works.

In the demo, Powers detailed a fairly typical instant message conversation in which one user shares a link with another to Buzzfeed Video’s ‘Tasty’ app. The recipient can then open the app and perform perfunctory tasks — like viewing a recipe — without the need to install the full version. From there, the user will have the option to view/use what they came for and leave, or install the full application without making an additional search in the Play Store.

The lack of moving parts completely demolished the barrier to entry when on-boarding new users quickly. Google I/O laid the perfect foundational example for a test case: crowded WiFi and 4G/LTE meant downloading full applications was often out of the question if you were in a pinch. The ability to just get what you need and move on is what Instant Apps was designed for.

Some users will get Android Instant Apps today, and everyone else is set to follow soon after. Those that have the feature may not even realize it. The difference in behavior is subtle, as intended. When following an app link you’ll see a simplified Android app interface instead — that’s how you know you’re using an Instant App.

Read next: Donald Trump's newest Twitter rival is... an onion in a bag?