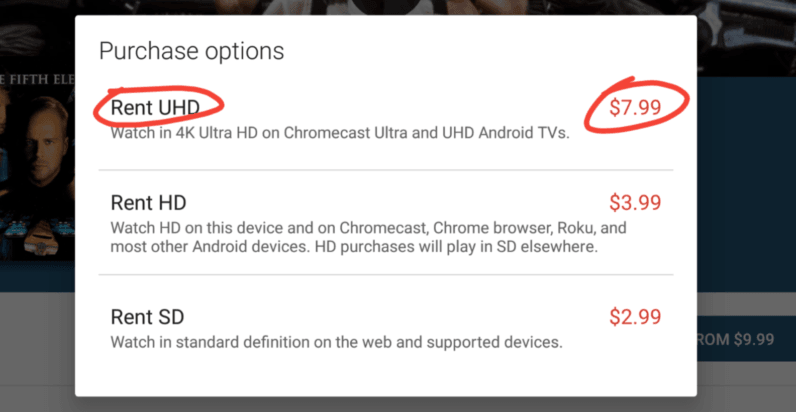 A few weeks ago it seemed like Google was all ready to start rolling out 4K movies, but it turned out it to be a mistake. Now the higher resolution option has arrived, for real this time.
Google says there are 125 films currently available in 4K, with more on the way soon. The videos are encoded in Google’s VP9 codec, and there doesn’t seem to be any support for HDR as of yet. Google says 4K support is currently enabled on the Chromecast Ultra, Sony Bravia Android TVs, and Xiaomi Mi Box 3, but the option showed up on the 4K LeEco Super4 x55 I’m testing as well.
When I first wrote about the accidental 4K option, I noticed a few interesting details, so I’m just going to paraphrase my findings here:
Every UHD rental I found cost $7.99, which is a hefty, but expected premium over the standard HD price of $3.99 or the $2.99 for SD. It’s right in line with or cheaper than UHD options from other services.Full 4K purchases I found ranged from $24.99 to $29.99, compared to the the $12.99 HD prices for the same titles.

Google probably figures that few people have 4K TVs, and those early adopters are probably willing to shell out a bit more for better quality. Just be warned.

One other problem is that there’s no clear way to upgrade your previous HD purchases to UHD. I’ve encountered that issue before when trying to upgrade SD movies to HD, and so far the only solution I’ve been find is calling Google and explaining the situation – it’ll refund you and you can repurchase.

No word on when 4K support will arrive on other platforms yet, but it’s a step in the right direction (and about darn time).