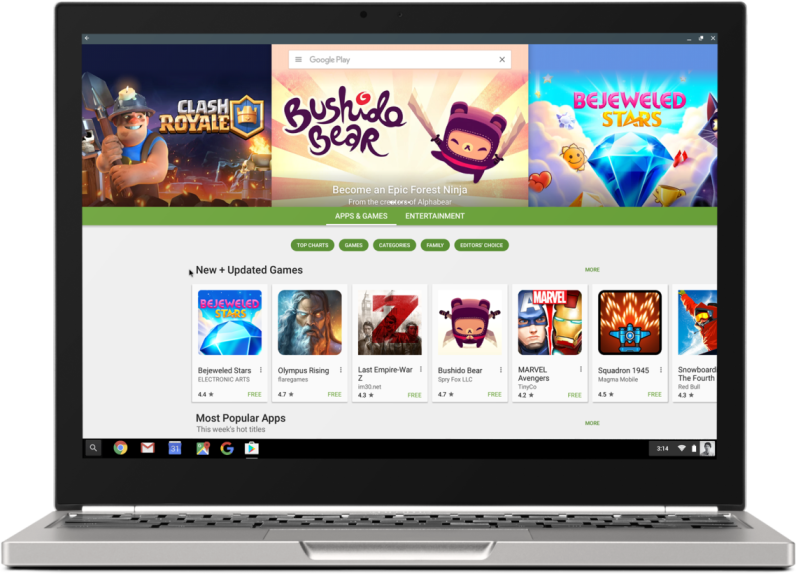 As reported yesterday, Android apps are coming to Chromebooks at long last via a Google Play Store app. What we didn’t know were which Chromebooks will be getting Android apps – or indeed, that there would be limitations at all.

Google is rolling out the update in batches, and it will begin with three models in mid-June 2016: The Asus Chromebook R11 and Chromebook Flip, and the 2015 Chromebook Pixel.

That’s a pretty narrow list to start, but fret not; the tally of Chromebooks that will work with Android “later in 2016” is quite extensive.

There are some brands I’d never even heard of (Bobicus? Viglen?) so pretty much all but the very earliest Chromebooks are covered. Head on over to Google’s support page for the full list

Google has also confirmed that virtually all Android apps will work on the platform, so no worries about whether that obscure Gingerbread-era app you still use will run on your laptop.

That said, functionality will be limited by your hardware; you can’t use an app that requires a rear camera if your laptop doesn’t one. Google says Android apps will be SoC agnostic – they’ll work fine on either Arm or Intel-based hardware.

Google says it will begin pushing for more premium Chromebook hardware because of this development, including new devices later this year. It could also mean Android developers will start to focus more on how their apps perform on larger-screen devices.

Basically, Chromebooks are about to become serious work machines. Android compatibility means that suddenly Chromebook users will have access to a wealth of native apps that don’t rely on the Web, and while they won’t compete with Windows anytime soon, you can bet Google will continue to push Chromebooks and Android as options for real productivity.

The Google Play store, coming to a Chromebook near you on Chrome Blog

Read next: Google's new Awareness API will make your Android phone more like an iPhone