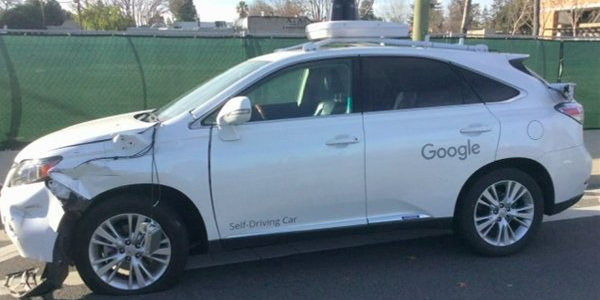 Today, the Associated Press has obtained (and released) surveillance video from inside the Mountain View public transit bus that was side-swiped by a Google self-driving car last month — its first at-fault accident.

Fortunately the accident occurred at low speeds, and resulted in no injuries to passengers on the bus or the Google Lexus’s “driver” who wasn’t operating the vehicle at the time.

We clearly bear some responsibility, because if our car hadn’t moved there wouldn’t have been a collision. That said, our test driver believed the bus was going to slow or stop to allow us to merge into the traffic, and that there would be sufficient space to do that.

More of these crashes are likely as Google ramps up its efforts to log miles on autonomous cars, but the unfortunate reality is that these misunderstandings are commonplace among human drivers, and it’s difficult to program AI to respond to these situations until they actually happen. There are millions of variables at play and some happen so infrequently that it’s really not possible to program for them until they do.

Read next: Forget drones, Amazon's getting into the proper aviation business