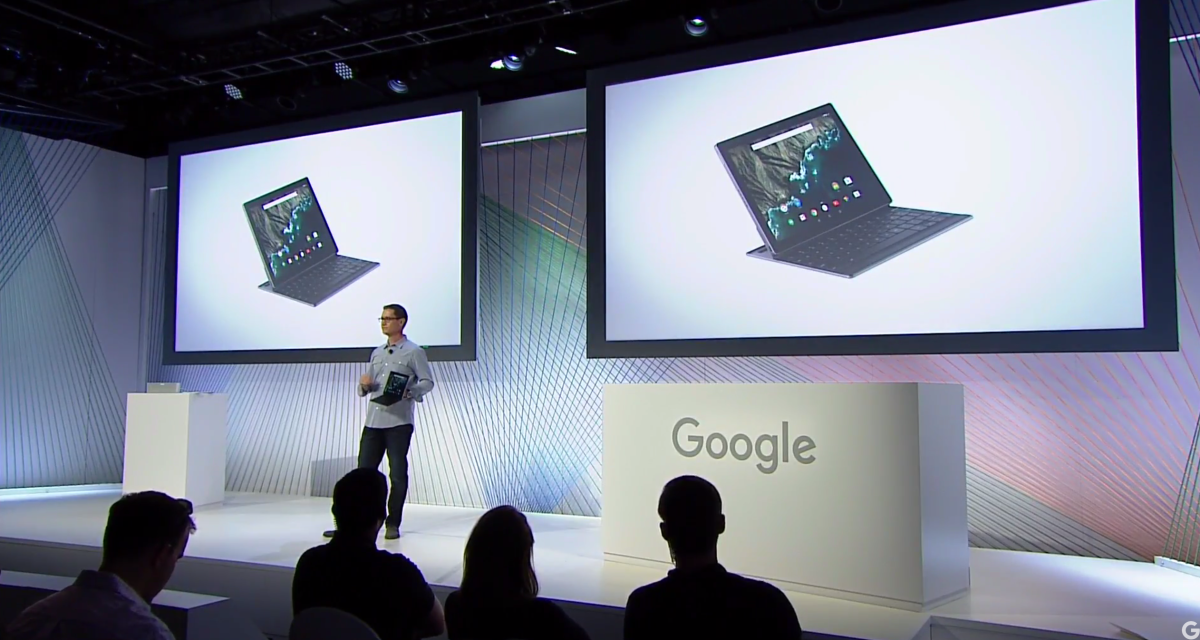 Google is going heavy on the hardware this year; not only are there two new Nexus phones, the company is also releasing a new convertible tablet that looks an awful lot like the Microsoft’s Surface devices or Apple’s new iPad Pro.

It follows the same angular metallic design ethos as previous Pixel devices, but with two major differences: this one runs on Android rather than Chrome OS, and the keyboard is now detachable.

(If you’re wondering why it doesn’t fall under the ‘Nexus’ moniker then, it’s because it’s built by Google itself rather than a temporary hardware partner.)

Onto the specs: the device features a 10.2-inch touchscreen with a Retina-class 308 ppi display (2560 x 1800) that can achieve an impressive 500 nits of brightness. Four far-field microphones help the device pick up audio cues for voice commands.

Inside, there’s a Nvidia X1 quad-core processor with a Maxwell GPU and 3GB of RAM. As you’d expect, it charges via USB-C, and the light bar carried over from earlier Pixel devices allows you to see remaining battery without turning the device on.

Google was proud of the Pixel C’s keyboard too. It attaches to the tablet magnetically, and can be adjusted for angle (something the iPad Pro can’t do) without requiring a kickstand like the Surface (which can dig into your legs and takes up space).

Impressively for a 10-inch tablet, Google says keys are mostly the same size as on the larger Pixel laptops, except for some of the modifier keys towards the edges of the keyboard. They also have the same amount of travel as on Google’s laptops, which will be appreciated by typing purists.

Unlike on the iPad Pro and Surface devices, it connects via Bluetooth, which means you should be able to use it without it being attached to the tablet. Power is provide wireless via inductive charging, so you never have to recharge it while attached.

The Pixel C goes on sale starting at $499 for the 32GB model or $599 for the 64GB edition, while the keyboard will cost you an extra $149. Google did not provide a specific launch date, but said it would be available from the Google Store before the holidays.