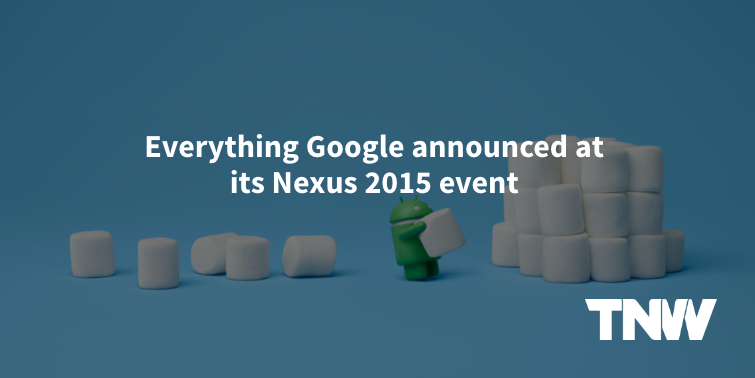 Google has officially unveiled its new gadgets before the holiday season. Here’s a synopsis of what went down – as always, click through to each story to see the full details.

Several rumors and leaks later, the new Nexus devices are here. This year, Google introduces the Nexus 5X and 6P.

The device will come with Android Marshmallow with improved notifications to alert you to any update without being disruptive. You can also search for apps straight on the search bar instead of just a basic Google search, and the number of pre-loaded apps have been reduced. If you still hate them, you’re now able to uninstall as you wish.

If you don’t want all that screen real estate, the 5.2-inch Nexus 5X might be more your size. The hardware is similar to the 6P with the same camera, battery and USB specs. Both phones sport an “Android Sensor Hub” which detects ambient lighting, gesture and motion – the tech is designed to help improve battery life as well, with up to 30 percent saved when the screen is off.

Both phones are available for pre-order today on the Play Store in the US, UK, Ireland and Japan. The Nexus 5X starts at $379 and 6P at $499, and they ship later this October completely unlocked.

You’ll get a free 90-day Google Play Music subscription with purchase, and a $50 Google Play credit for customers in the US. An optional Nexus Protect insurance plan is also available for an extra year of warranty, starting at $69 and $89 for the 5X and 6P respectively. Of course, you can use the devices on the Google Fi network wherever available.

Speaking of Google Play Music, along with the 90-day trial, you can also opt for a family plan pricing that allows up to six members for $14.99 a month.

Sharing – family or other wise – also comes to Google Photos. As rumored, Google Photos will now allow multiple users to collaboratively upload images to an album.

The app will also roll out the ability to label “important people” in your life to make searches easier. The tags are private, so you don’t have to use real names if you don’t want to. The feature arrives first on Android this week, with iOS and Web support coming soon.

Chromecast support also comes to Google Photos, including GIFs. Unlike mirroring, you don’t have to share your phone screen to port photos onto your TV.

To start off some Chromecast news, Showtime and Sling TV will receive support, alongside multitudes of apps such as multiplayer games, music streaming and sports apps.

But now, Chromecast won’t look anything like you remembered. The hardware is totally reconfigured with a flexible cord, a circular body and comes in three colors so you can style it to your home as you wish. The price remains at $35.

Google also introduced Chromecast Audio which lets you plug the dongle into any speaker to turn it into streaming device. All you have to do is plug it into the audio jack of any old stereo and the Wi-Fi will do all the work – no Bluetooth required.

You can control playback via mobile phones or Android Wear devices that are connected to your home network. You can also enable guest mode to share the DJ duty, and control any speakers in the same household hooked up a Chromecast Audio dongle. This means you are able to synchronize music throughout the house as well.

Chromecast Audio will be available today for $35 on the Play Store in 17 countries, and coming soon to retailers like Walmart and Best Buy in the US.

The Chromecast app for Android and iOS is now refreshed, so you can explore the apps that are supported by Chromecast and watch full HD content or bookmark them for later. There are new playback controls to turn your mobile phone into a remote as well.

Lastly, Chromecast will integrate a Fast Play feature to preload content based on what you are watching to help reduce buffering. Netflix was named as one of its first content partner, but Google says it will continue to expand this capability with other content providers.

To round out the hardware news today, Google announced the new Pixel C Chromebook. Google says the C stands for “convertible,” which allows it to be used as a tablet or laptop alongside a Bluetooth keyboard. Unlike the Microsoft Surface, however, there’s no kickstand involved.

When closed, the tablet is able to inductively charge the keyboard attachment, and it can last up to two months of daily active usage per charge. The 10-inch screen has a 2560 x 1800 resolution with 308 PPI, and comes with dual stereo speakers and USB Type-C. The device will arrive with Android Marshmallow, and is expected to receive updates every few months.

The Pixel C starts at $499 for the 32 GB tablet-only, and $149 for the Bluetooth keyboard. Availability remains vague at “before the holidays,” so we’ll keep you posted when we learn more.

What do you think of today’s devices from Google? Let us know in the comments below.

Read next: Twitter is reportedly ditching the 140 character limit