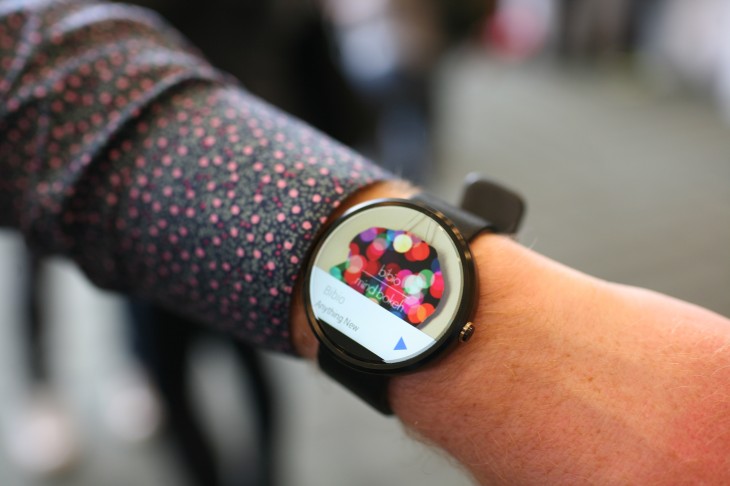 It’s been a month since Google announced Android Wear at it’s annual I/O developer conference and I’ve been wearing the Samsung Galaxy Gear Live ever since it was unveiled there. It is perhaps surprising, given to me that I haven’t ditched it — instead it has become an important part of my daily routine.

I’ve worn a watch every day for as long as I can remember, so it’s not a shock to have something on my wrist unlike many young people who have never worn a watch. For years, the media has predicted the decline of the watch, but it seems that they’re about to experience a second coming, off the back of smartphones. Perhaps all they needed was a little upgrade.

This isn’t my first foray into wearables; when Fitbit launched its Flex wristband I enthusiastically adopted it but quickly gave up on the device. While it was incredibly useful to see how much activity I was doing every day, it was too simple. It didn’t offer any useful insights into what I could do with the data nor did it do anything more than count steps.

When trying Android Wear for the first time, I approached it with caution and a little bit of hostility because of these experiences. I tweeted complaining of difficulties trying to set up the device, the first time user experience, the hilarious notifications and mocked its battery life but after a few weeks of wearing it found it incredibly useful in a full review.

But why the change of tune? Over the weeks I observed a major change in my own behavior thanks to the Gear Live; less pulling out my phone to check the time and finding myself sucked into checking apps. We’re all guilty of this kind of behavior which is partially a symptom of not having any other way to tell the time as watches fade from utility into more of a fashion accessory.

You’re at dinner with friends and want to know what the time is so pull out your phone before suddenly finding yourself checking your Twitter feed. Almost all of us do it and this behavior has come from years of smartphone use, which trained you to want to keep up with the latest online. It’s not by accident either, as developers seek to find more ways to engage you with their apps.

The smartwatch, for me, has become an important tool in waging war against the onslaught of notifications I receive on a daily basis as well as acting as a timepiece. It’s the everything inbox, right on your wrist, but it also gives you a way to cut through the clutter without getting stuck on your phone. Even though very few major applications support Android Wear yet, I use it as a way to clear out Twitter notifications and emails as they come in, rather than every time I pick up my phone.

Instead of regularly pulling out my phone, checking Twitter, Snapchat and other apps, I can act on the offensive right from my wrist and know exactly what’s left waiting for my full attention when I do finally get to them. It’s killed the habit in just four weeks of pulling out my phone and staring at the lockscreen and has become the way I deal with almost everything.

I know what you’re thinking… yes, perhaps this could lead to actually using your phone more. But, the advantage is that it gives you the power to discern whether or not you actually need to do something when it buzzes with something for your attention.

Google on your wrist

The other reason I can’t take it off? I’ve now got Google on my wrist.

Despite thinking it would be a gimmick, it’s actually incredibly compelling to be able to just say “OK, Google” and search for anything without having to stab away at the screen. I only find myself searching for trivial things, such as the population of a city, the time on the other side of the world or who starred in a movie, but these are all things that make sense to search for with voice. You might feel stupid doing it in public (I still do) but it works even with a significant amount of background noise.

We’re finally at a point where it’s easier to just say the command then search it because you’re now wearing a piece of hardware that’s in one of the easiest places accessible on your body. It’s true, you wouldn’t search for more complex things such as the meaning of life or backstory on the latest news, but it’s powerful for those little facts you want to look up day to day. There is some work that needs to be done to make sure that the device doesn’t accidentally pick up someone else’s voice saying “OK, Google” but it’s generally very good.

With or without the iWatch

One of my frustrations recently has been writers constantly rattling on that the category won’t take off until Apple releases it’s long-rumored iWatch, but I disagree. Headlines like “Can Apple’s iWatch save smartwatches” are a regular occurrence now, but I don’t think the device will be too much of a departure from what is already on sale.

An iWatch may offer unique health sensors and look a little more fashionable than the Gear Live, but it doesn’t seem likely that it’s going to be a Hail Mary moment for Apple. Nor is it likely to do much more than collect health data and serve up notifications, just like now. With the Moto360 on the horizon, perhaps Apple’s launch won’t be as significant as many expect it to be.

Until recently, attempts to build a smartwatch have resulted in products that try to do too many things. Who needs a camera on their wrist? As it turns out, nobody, which is why Android Wear is so compelling. It keeps the smartwatch simple by offering timely information and dead simple search while looking (mostly) attractive.

The biggest pain right now is unsurprising: battery life. I was hopeful that we’d get devices that last at least three days between a charge, but it’s more like two days if you’re careful. I’ve seen rumors that the Moto360 has an impressive battery life that can last up to a week. That would be an incredible feat and make owning one more compelling, though it’s hard to believe at this point.

When the Moto360 eventually hits the market, I think that Android Wear will hit its stride. The excitement for the device is palpable; when we tried it out at Google I/O, a crowd quickly gathered around us trying to get a look and test it out themselves.

Android Wear has proven that the smartwatch has value for me and many others, even if it requires frequent charging. It’s a price I’m willing to pay for the added value I get over wearing a normal watch and I’m sure it’ll get better over time. Yes, Android Wear needs work, but it’s ready for the mainstream right now.

Read Next: 10 Apps That Every Smartwatch Should Have

Read next: As Spotify passes one year in Asia, piracy is still its number one challenge