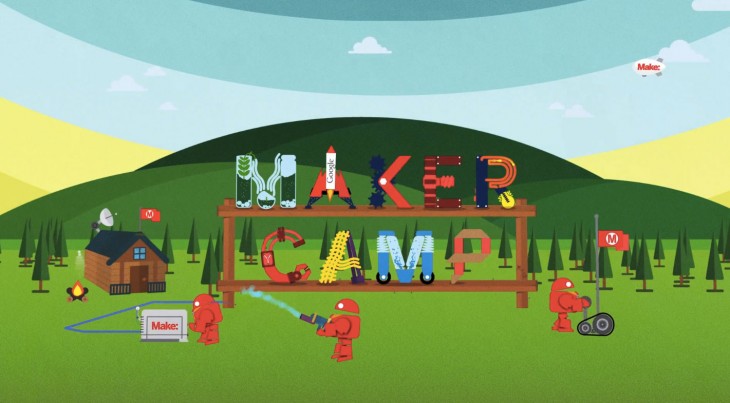 Summer vacation is awesome. You have three whole months to sit around and gradually get bored. Fortunately, for the creative and technically minded teen, Google and Maker have teamed up for the Maker Camp, a six week do-it-yourself online event that’ll get kids excited about building and exploring technology. It’s like your own personal Maker Faire at home.

Maker Camp takes place via Google Hangouts every weekday starting July 7. The day’s Hangout start at 11AM PT and include projects (last year they made a piano out of a banana), activities, talks with people like astronaut Buzz Aldrin, and virtual field-trip Fridays. The first field trip will be to visit the Google Trek team responsible for the Google Map Street View tours of various attractions. Teens, 13 and over (those under 13 can watch with a parent or guardian’s account) can register for the free camp now.

It’s really the projects that are the draw of the camp. Monday through Thursday a new project is presented. A schedule of the week’s projects are available so campers can gather necessary supplies. Most of which are regular household items. But, anyone taking part in the multi-week affair shouldn’t feel pressured to work on every project. “We want the kids to do whatever they want. It’s like a summer camp where they let kids make a choice and they choose things that grab their interest,” says Maker Media CEO, Dale Dougherty.

This is Maker Camp’s third year offering online classes and talks to teens. It started in 2012 when Google approached Make about using Hangouts to create an online meeting place to teach kids about technology that’s fun. Dougherty admits that they didn’t have much time to bring it all together. “We did this over 6 weeks,” he admits. But in that time it was able to create a daily schedule and reach out to clubs, libraries, boys and girls clubs and other organizations to offer Maker Camp to groups of kids. Some of which might not have internet access at home.

Since some of these satellite (or affiliates as Google and Make call them) might be in low-income areas, care packages with the the necessary supplies are sent to each location. You can find the location of a local affiliate here. Most of them are still accepting campers. Those “camps” could go beyond the summer Maker Camp.

A side effect of the program is that some of those one-off groups became full-fledged clubs. Kevin Reeve of Cache county Utah was contacted last year about creating an affiliate site for the 2013 Make Camp. He enlisted his kids to recruit their friends. With a quickly thrown together team of teens, Reeve quickly noticed that were really excited about the experience. He had the revelation, “hey this could work, there are kids out there that want to do this stuff.”

By October Reeve and other adults had put together a weekly Maker Space for kids in their area. The Cache County Makers Club already has 40 members and has 30 kids on a waiting list. It’s not just kids that are interested in the club. “We have 10 adult mentors participating in the club. There are plenty of adults that are excited to help kids and pass on their passion for technology and making,” says Reeve.

That passion doesn’t stop in Utah.

“I think one of the reason that the maker movement is growing today is that so many families are participating. It’s a way to be active and engaged and find something they really love to do and do it together.” says Dougherty. Plus there’s the whole science and technology are cool aspect.

Summer is a great time to intro kids to the practical aspect of what they would be learning out of textbooks while school is in session. Instead of following a lesson plan that forces everyone to learn the same thing regardless of interests, the camp gives them a chance to focus on what interests them. In fact, some of those kids actually start to build projects before the camp starts.

“One of the more impressive things about Maker Camp, especially last year, is that kids started showing what they were making,” Dougherty told TNW.  It might take a kid weeks to create their own project and Maker Camp gives them the opportunity to share that project with everyone.

It’s really more than just a bunch of teens sitting at home figuring out how to solder. Maker Camp is building a community and getting kids (and probably many adults) interested in science and technology in a way that many schools might not be able to. And if any of those kids creates something that truly changes the world, well that’s what happens when you make education fun and give everyone access.

Read next: 12 strategies to vet your next technical hire