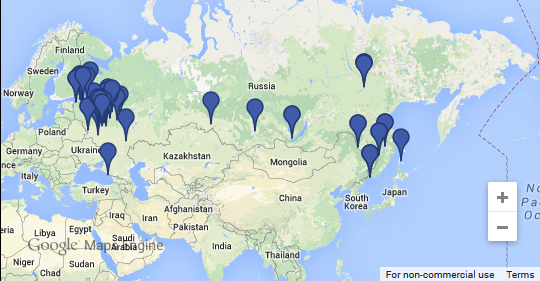 With the 2014 Winter Olympic Games kicking off in Sochi, Russia, on February 7, Google has just announced it’s adding a tonne of imagery from a slew of towns, cities and sights of the gargantuan country to Street View.

From today, you’ll be able to view ground-level imagery from Vladivostok, Yakutsk, Irkutsk and Sochi, which together account for around 1.5 million people. As you can see from the map above, Google has been doing a lot of driving, dipping into the farthest reaches of the country. Last year, Street View cars covered 300,000 km in Russia, which it says constitutes around 60% of the population. Here’s a look at Yakutsk in the east.

In related news, Google says it’s also introducing its first ever imagery in Slovenia, with the Central European country becoming its 56th inclusion on Street View.

Read next: All the tech news you need to know from Eastern Europe this January