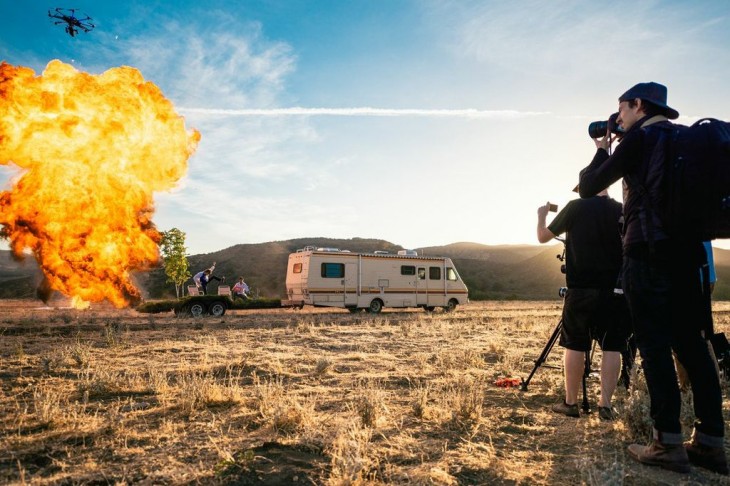 YouTube Rewind started out as a fun way to showcase the year’s top videos and memes, but the annual retrospective also serves as an important point of affirmation for the growing generation of YouTube stars.

If you haven’t seen the video yet, here it is:

We dropped by one of the projects shooting days for the video to see what went into the production with our own eyes. To learn more about the project, you can also check out Google’s own peek into the making of the video.

YouTube Brand Marketing Manager Dom Elliott, the project’s lead, explained in an interview the kind of expectations he had to live up to.

“A couple months ago, we were sitting down thinking, ‘How do we top last year? How do you do a sequel to something that was a big hit?’” he said, adding that the team had considered making a series of videos or taking the project in a new direction. “We decided we’ve got to go big. We knew that we wanted to up the production and ‘epicness.’”

According to Elliott, YouTube also set about making this year’s Rewind more international. Last year’s mashup already looked overseas to PSY’s mega-viral Gangnam Style, but the team put in extra effort to make sure to include international stars like pewdiepie and Girls’ Generation.

“Rewind is all about celebrating the community, literally celebrating our top creators. We see it as this cool thing we’re sharing with our super fans. It’s just kind of a big love-in at the end of the year,” Elliott said.

Ylvis’s “What Does the Fox Say?” served as the main frame for the song, but Google tapped DJ Earworm for a proper mashup of the year’s biggest songs, including Robin Thicke’s Blurred Lines, Macklemore & Ryan Lewis’ Can’t Hold Us, Daft Punk’s Get Lucky, PSY’s Gentleman and the Harlem Shake by Baauer. Miley Cyrus’s Wrecking Ball also got a nice hat tip.

The YouTube Trends team helped sift through data to identify the most viral content throughout the year. Elliott also said the Rewind crew had to work on the fly to incorporate new memes as they emerged toward the end of this year.

However, for many younger viewers, there seems to be no clear distinction between a YouTube star and a celebrity.

“[YouTubers are] proper big stars to their audience,” Elliott noted. “It’s a really exciting thing where YouTube has this huge audience of people, teenagers, where these are real stars to them.”

I asked Elliott what his favorite meme from the year was, and he mentioned goats screaming like humans. I guess that explains why the goats got such a big role in this year’s retrospective.

The slow-mo explosion with the Breaking Bad RV at the end is easily the most epic shot of the video, but many of the scenes also took plenty of extra coordination to create. For instance, there was palpable tension among the crew when filming the shot where the wrecking ball breaks through Jenna Marbles’ wall into DeStorm’s Blurred Lines set because they only had one chance to get it right.

YouTubers may command the same level of star power with young people as traditional celebrities, but Elliott noted that the collaborative nature of the platform also makes them easy to work with.

“You walk around and chat them, and they’re really cool people, down to earth. They get what we’re trying to do,” he said.

Of course, he’s not really in a position to say otherwise, but the claim does line up with the interactions we’ve had with YouTubers.

For help creating this year’s video, Google turned to Portal A, creative studio that specializes in producing content for YouTube. The firm worked on the 2012 and 2011 Rewind videos as well.

Portal A partner Zach Blume said this year’s Rewind was the most fun project his company has worked on. Normally, the studio is educating its clients about what kind of content works best on YouTube, so it’s great to partner up with the platform itself.

“Working with YouTube directly, they get it. For us, we get to really flex our muscles creatively,” he said.

On the day that we visited the set, Portal A was gearing up to work with 40 partners and 100 people for the shoot.

“It’s a major logistical undertaking,” he continued, while adding that the project had been incredibly smooth.

Most of the shooting was done in and outside of Los Angeles, though several segments were filmed remotely and sent in. The crew had to switch from doing helicopter shots and explosions one day to recreating a night forest.

When I asked a YouTube spokesperson how big the production budget was, he noted only that the company was “definitely spending some money” on it, but that the amount wasn’t “huge.”

Lots of sites do an annual recap, but YouTube Rewind’s has always (and fittingly) been the most entertaining. “What Does 2013 Say?” will be a hard one to top next year, but something tells me YouTube still has a few tricks up its sleeve.