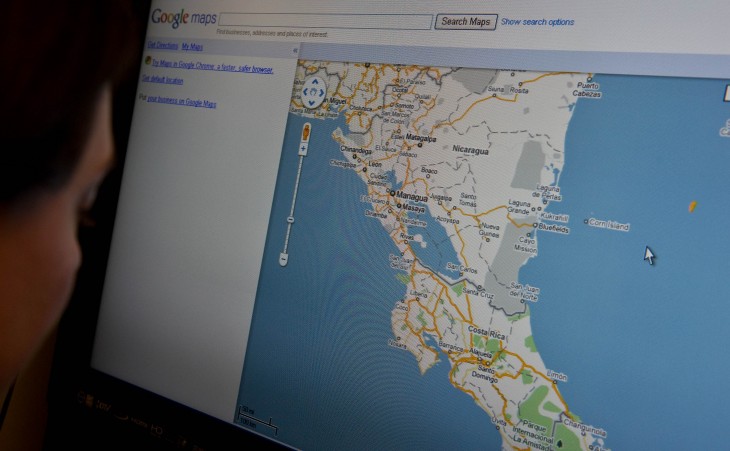 Google has unveiled a new offering for its Maps product in the business setting as part of its vision into making it the next productivity tool. Starting today, companies can use Maps Engine Pro to better marry location and their data in order to “visualize and share” it on a map.

The service costs just $5 per user per month and business users can take advantage of a “new document type.” You can import a variety of data from spreadsheets such as addresses, names, office locations, sales leads, and more into Google Maps and it will be displayed visually. This certainly beats having to look at a complex file full of data and seeing how it relates to each other from a location standpoint.

Brian McClendon, Google’s Vice President for its Maps product, said during today’s press conference that his product has seen pervasive growth since its debut in 2005. More than 1 million active websites and apps use Google Maps’ API with over 1 billion monthly active users. He says that the product has become familiar with users. .

What data does Google use to put together a useful mapping product? It uses local, imagery, street view, and base map — all designed to give it a detailed picture of the world. All of this was recited by McClendon during his presentation at the company’s developer conference earlier this year.

Google says that there is a whole another set of data that rests on top of the entire mapping structure: the Knowledge Graph. The things that are unusual about a place about where you might want to go in London or other queries rests on top of the map layer.

Every user is a cartographer

Google Maps has been used in a variety of use cases. McClendon says that for consumers, it’s all about finding specific venues or locations, such as Citi bike stations in New York City. In the enterprise, it’s used to map city infrastructure. But what about professionals? Google wants to enable mapping business data and it’s going to do so with Maps Engine Pro, a new document type.

Maps Engine isn’t really new — it’s been around since September 2011 when it launched as Google Earth Builder as a tool to enable users to “to store, manage and share their geospatial data using Google’s cloud computing infrastructure”. In March, the company unveiled Google Maps Engine Lite in beta for consumers to create their own custom maps. We’re told that it has been absorbed into the Google Maps product.

The company believes that within the enterprise, Google Maps should work the way you live. This includes enabling better decision making, optimizing people and assets, engaging users, and aiding in the development of new apps.

Vinay Goel, Director of Global Product Management for Google Maps for Business, explained that every user can and should be a cartographer. Every one of us has experience in local data that we can contribute to the greater good. He cites a study that says 51 percent of US companies use web-based mapping services in their business, while 36 percent use geo-enabled devices in their operation. However, less than 5 percent of employees use geospatial services to do their job.

Every day problems within an organization could be solved using geo-related data, such as for HR, logistics, and sales managers, underwriters, marketers, retail analysts, and others.

With Google Maps Engine Pro, it’s a $5 per user per month service that enables companies to leverage the Knowledge Graph to make them more productive.

Solving geo-related problems both on the Web and mobile

Heather Folsom, Product Manager for Maps Engine Pro, explained that the new product will produce more value out of their information they use everyday across geo-related problems. The answers to the information is typically stored in an Excel spreadsheet, which isn’t really efficient towards resolving a dilemma. With Maps Engine Pro, businesses can import that data into Google Maps that lets you do anything with it that you would with any document.

Imagine if you run a chain of salad bar restaurants in the East Coast and are doing pretty well and are considering expanding to San Francisco. Unfortunately you’re not sure about how successful it will do. You receive a list of real estate information from San Francisco’s city government, but the spreadsheet is pretty confusing to decipher. Folsom says that you put it in a map, it inputs all the data and using Maps Engine Pro, you can get a better stylized visual representation on where you might figure out opening up a store next to high rises in affordable areas.

Data can be edited in spreadsheets in real-time and the maps will be updated immediately.

If you’re working with colleagues, you can share your map using standard Google Docs collaboration settings.

Here’s a list of the features you can get:

Today’s update is also available through Google Maps Engine’s Android app. There are no current plans to bring it to iOS.

But not quite content with just Maps Engine Pro, Dylan Lorimer, one of the Product Manager for Google Maps Engine, announced the introduction of its mapping platform to help brands create sophisticated maps. This platform offers businesses the ability to import common GIS data formats, support for millions of features, support for GBs, TBs, or PBs of data. What’s more, it includes support for rich map styling, large scale geocoding, a robust developer API, and GIS interoperability. A mobile app is also available.

The Google Maps Engine platform is a way for businesses to streamline their GIS efforts to have them stored on a single piece of infrastructure. Currently, companies can utilize Google’s Map API to layer their data on top of a map interface. But now, the platform migrates that data towards Google Cloud.

Lorimer says that the platform is useful for those who wish to unlock more GIS data and interoperability in Google Maps. For those who currently have data stored in on-premise servers, Google makes it possible to transfer the data to its cloud offering through a partnership with Safe Software. What’s more, the company has also created a third-party GIS connectivity tool that links with ESRI and OGC.

Business users will pay only for the infrastructure that they use. Already the service is being used by brands like GeoDigital, Iris, and others.

Google Maps Engine account is made free today to make and deploy maps at scale — but you’re only going to get a taste of what is possible. The company says that you’re limited by a quota (“tens of megabytes of data”) before you need to upgrade for the enterprise version.

As part of its effort to improve access to its infrastructure, Google announced the availability of its Public Data program that is open to local, city, and state governments to leverage its product to help track and publish maps to show what’s going on in their city or state.

And if that wasn’t enough, Google is also introducing an analytics product for both Maps Engine Pro and its platform. Starting today, users can take advantage of specific analytical features, which depend on whether you’re a Pro or platform customer.

Peter Birch, another Google Maps Engine product manager, said that with Maps Engine Pro, users will receive basic features to analyze the meaning behind their data. However, if you want to really understand what’s happening with it and do more complex calculations, this is available on the platform.