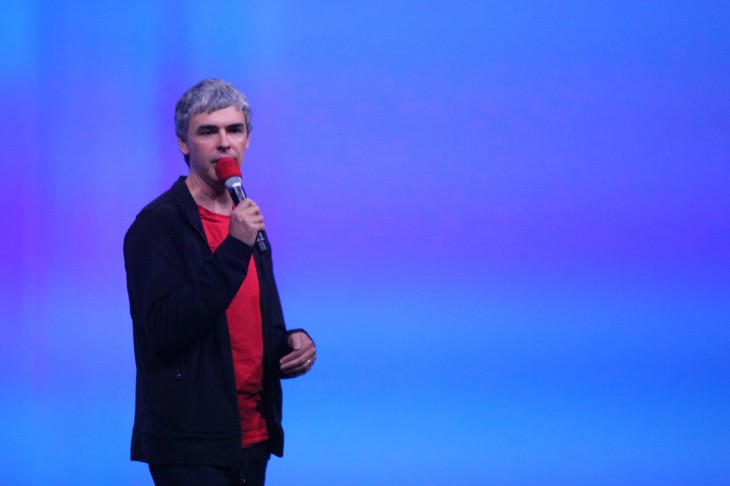 “I was really lucky growing up,” said Google CEO Larry Page at the I/O conference today. “My dad was really interested in technology. One time we drove across the country to go to a robotics conference…it was one of the only times that I ever saw my dad argue with somebody to get someone into an event who was underage.”

Page spun that into an entreaty to the audience to take an interest in technology and to become evangelists for it to others. He also said that this was why Google got involved in The Internship, a movie starring Owen Wilson and Vince Vaughn about two guys who join Google at the bottom rung.

He then spoke about phones and tablets, and the way we jump between them.

“We use devices interchangeably,” said Page, “which is why we put so much effort into our platforms.”

“Technology should do the hard work so that people can get on with their life.

“I think Google Now…gives you information without even having to task…flight times, boarding passes, directions, all with no effort,” added Page. “A really smart assistant that does these things for you so you don’t have to.”

“Every story I read about Google is ‘us vs some other company’ or some stupid thing, and I just don’t find that very interesting. We should be building Great things that don’t exist. Being negative isn’t how we make progress. Most important things are not zero sum, there is a lot of opportunity out there.”

Page also then took to the stage to answer questions in a rare Q&A. He talked, in general terms, about the way that companies competed against one another, specifically calling out Microsoft when it came to moving the web forward with open standards. Which is a somewhat ironic statement given that Google just split a new Web engine called Blink off from the common Webkit repository.

Page also spoke briefly about Google Glass, saying that they’re after ‘experiences that make users happy’. He says that they’re going to be working on Glass for the next 10 years and that each successive model will be better, and that Google has just put out a ‘minimum number’ of features so far. He spoke about navigation, phone calls, SMS and voice search as well.

“Ultimately, a lot of your experiences can move to Glass, but we’re relying on you to figure that out,” he added.

Page also briefly touched on Google’s rough relationship with Oracle over Java, which was sparked by a question about how Google would continue to move Android forward without complete control of its underpinnings. Page said that Google would manage, even though the circumstances weren’t ideal.

He also commented on the fact that a lot of laws which are over 50 years old ‘can’t be right’ because they don’t take the internet into account. This set off a lot of talk about whether Page was talking about ‘all laws’ but it seemed clear from the context that it was about ‘tech-related’ laws specifically.

Probably the core takeaway from Page’s Q&A, however, was that he was all about pushing things forward with big, sweeping changes and bold moves, not incremental changes.

He exemplified this with talk about the raw materials used to create smartphones, and how they were more than the sum of their parts. Incremental thinking would take a long time to get you from a few ounces of raw materials to a functioning device.

Read next: Google Wallet now lets you send money via Gmail, gets an Android API for goods and services