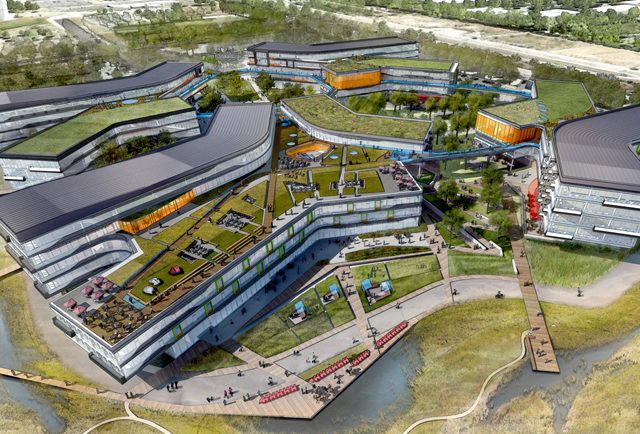 Google has revealed that it is planning to construct a 1.1 million square foot campus, dubbed “Bay View,” to be located in Mountain View, but “closer to San Francisco Bay.” Update: Statement from Google at foot of post.

To make this a reality, Google has teamed up with NBBJ, a Seattle-based architecture firm which Vanity Fair calls “a somewhat more conventional choice” than the architect Google originally intended to work with back in 2011.

According to the manager of Google’s real estate, David Radcliffe, Google has a history of converting workspaces to its own needs, but has never constructed a building from scratch — something both Apple and Facebook have invested heavily in lately

As shown below, the upcoming campus will consist of nine different structures, all looking like “bent rectangles.” Radcliffe tells VF that “no employee in the 1.1-million-square-foot complex will be more than a two-and-a-half-minute walk from any other.”

Update: Google has provided us with the following statement:

We are beginning construction on our new Bayview Campus, which is a key to our growth and another sign of our commitment to the area. As this project progresses, we’ll continue to work closely with NASA, the community and the City of Mountain View.

The complete rendering, via NBBJ:

Read next: Financial Times: Google in talks to build a streaming music service with subscription and free tiers