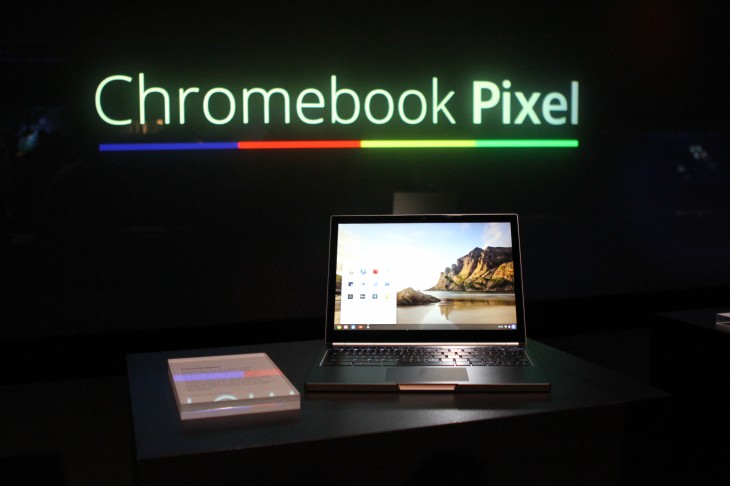 Sundar Pinchai, Google’s SVP of Chrome and Apps took the stage at the company’s latest media event to announce the news. He said that the company has been working for the past year to create a device that could be a second or third computer for the home. It started with $249 Samsung Chromebook that was number one on Amazon for the 155 days it’s been on sale, and continued with the launch of its Acer Chromebook.

The specifications of the Chromebook Pixel are impressive — the device sets out to compete against the Macbook Air and other high-resolution screen devices. Google says that the Pixel has a 12.85-inch display, a 3:2 photographic format, and 4.3 million pixels. Additionally, it comes with a 2560 x 1700 screen resolution at 239 pixels per inch, along with a 178 degree viewing angle. Google says that it’s also much brighter than other laptops with 400 nit (a measure of luminence). The device weights just 3.35 pounds.

When you compare these specs against the Macbook Air, it’s actually slightly different: the MacBook Air 13-inch has a smaller resolution and a lower pixel per inch. Pinchai says that the Pixel stacks up against Apple’s computer because the Macbook Air doesn’t have a touchscreen display — something that the late Steve Jobs said wouldn’t work:

We’ve done tons of user testing on this and it turns out it doesn’t work. Touch surfaces don’t want to be vertical. It gives great demo, but after a short period of time you start to fatigue, and after an extended period of time, your arm wants to fall off.

Pinchai says there are a set of users that are committed to living in the cloud and Google wanted to build the best experience for, thus the basis for the Pixel.

With the Pixel, everything has been re-imagined, from the industrial design to how the device feels to being able to use it for hours without suffering from fatigue.  It has rounded edges instead of corners to avoid having the computer dig into your skin and its cooling vents and screws have been hidden in order to make the Chromebook look clean and simple. The keyboard controller has also been updated so that it’s supposedly more responsive for fast typers.

Additionally, Google has experimented to find the right touchscreen surface that makes the experience less irritating so that users don’t notice what they’re doing. Through the use of raw data, Google is able to better track the movements of the user to determine what they want to do — whether you’re using a four-finger swipe or using two hands or a thumb, the touchpad has been developed to be as accurate as possible.

The Chromebook Pixel packs three microphones built directly into the device, all to help with noise cancellation when you’re having a Google Hangout, Skype, or video conference. These microphones are geared towards silencing the external noise from the keyboard and from around you.

It also comes equipped with an Intel core i5 processor that helps it display incredibly fast content. Pinchai says that it can stream multiple 1080p videos.

But it’s not just the hardware that has been retooled, but also the software. With a Chromebook, users get the benefit of service like Gmail, Google Docs, YouTube, Google Maps, and Search, all at their fingertips. Pinchai highlighted two new developments coming soon to the Google web app store that have been built to suit the Chromebook Pixel: QuickOffice and Google+ Photos.

With people dedicated to living in the cloud, being able to be productive in a work capacity is important. Obviously since the Chromebook doesn’t have a large internal hard drive, finding a way to compose documents, build spreadsheets, and the like in the cloud is required. Thus, the reason for Google Docs. However, when a colleague sends you a Word or Excel document, opening it up on a Chromebook can be a pain. With Google acquisition of QuickOffice, it has now been integrated into Google Docs. While it will work natively in the browser and offline, it won’t be available until the next two to three months and will be shipped with the Pixel.

Google+ has been a great tool for photographers. The company has shared that it will be launching a new web app geared towards those users who choose to snap photos using a physical camera instead of their phone and make it a seamless and process. Launching in the next 3 weeks in the Chrome store, Google+ Photos take photos that are downloaded off a memory card and automatically detects which ones are great and recommends those that should be uploaded to Google+. The company says that it hopes this app will make it easier for photographers to upload, view, and share their work.

Since it’s also a Chromebook, Pinchai says the Pixel also has an operating system that boots in seconds, is maintenance-free, and has built-in security so users don’t have to worry about installs or updates.

The Chromebook Pixel is available starting today for purchase from the Google Play store. Additionally, it is working with Best Buy to set up 10 locations in the US where you can test out the device. For those in the UK, PC World has four stores participating.

For those interested, you’ll be happy to know that the Pixel is not just a WiFi enabled device — it uses LTE technology to allow you to connect to the Internet through Verizon faster. As a point of reference, previous Chromebooks have had 3G technology.

If price is a factor, then you’ll know that the Pixel with WiFi is priced at $1,299. For those interested in LTE, it will be $1,499 and will begin shipping the first week of April — it’s also only available in the US. The Chromebook includes: 1TB Google Drive cloud storage, 12 sessions of GoGo Internet, and 100 MB/month of two years of Verizon Wireless mobile broadband (LTE only).

The amount of hard drive also depends on which Chromebook you get — with the WiFi-only, it has 32GB of solid state drive, but for the LTE version, it has 64GB.

The news of Google’s latest Chromebook doesn’t come as a surprise, especially in light of a report from the Wall Street Journal yesterday that made the announcement prematurely. However, the specifications of the tech giant’s touch screen Chromebook haven’t been known — until now.

While no specific sales figures were revealed at today’s media event, the Wall Street Journal reports that it estimates 100,000 Chromebooks were sold last year. The release of Chromebook Pixel would surely allow Google to be competitive as it goes toe-to-toe against Microsoft and its Windows 8 devices.

Read next: After employees opt to be paid in Bitcoin, the Internet Archive asks for donations in the digital currency