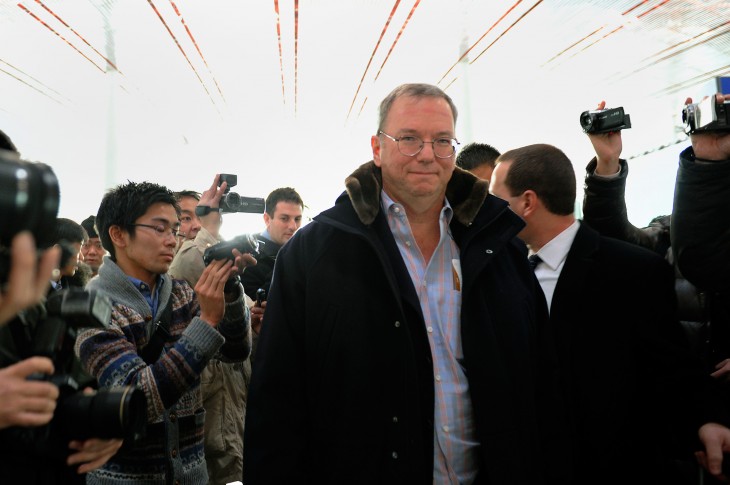 Eric Schmidt, Executive Chairman of Google, has shared extensive thoughts about his recent trip to North Korea which he attended alongside former New Mexico governor Bill Richardson, and others. Schmidt had already told media that the country and its economy is suffering from its lack of Internet, but now he’s published more thoughts on the topic.

Schmidt states that the current Internet system North Korea has isn’t sufficient to help the country stay connected with the rest of the world. In fact, its strict policies on who can access the Internet has caused it to lag behind everyone else:

Once the internet starts in any country, citizens in that country can certainly build on top of it, but the government has to do one thing: open up the Internet first. They have to make it possible for people to use the Internet, which the government of North Korea has not yet done. It is their choice now, and in my view, it’s time for them to start, or they will remain behind.

While he was in the country, he got to experience their software and technology and says it’s based on open source running mostly Linux and that Internet access was limited to only the government, the military, and universities. The public has been left out. So what are the privileged groups getting to use?

There is a 3G network that is a joint venture with an Egyptian company called Orascom. It is a 2100 Megahertz SMS-based technology network, that does not, for example, allow users to have a data connection and use smart phones. It would be very easy for them to turn the Internet on for this 3G network. Estimates are that are about a million and a half phones in the DPRK with some growth planned in the near future.

Because North Korea has limited its technology access, this has raised concerns from Schmidt who finds North Korea’s decision to prevent its citizens from connecting with the rest of the world using the Internet to be a very bad move. He believes that its virtual isolation is “very much going to affect their physical world and their economic growth. It will make it harder for them to catch up economically.”

The Google executive traveled to North Korea earlier this month and it was reported that he had a productive time there. Governor Richardson told news organizations that Schmidt was “like a rock star” and that he spoke to many about the importance of a free Internet. Despite the criticism he received from the United States government, he still went and became, as TNW’s Alex Wilhelm described it, as “one of the most public figures of a company that has broken down the walls between information and the average person” — a walking contradiction to North Korea’s policies.

Schmidt is a vocal proponent of spreading Internet access. As we reported earlier, in June 2012, he stated that “the World Wide Web has yet to live up to its name.” With Google, he believes that it was born “with its goal of making information accessible to the masses.” Clearly, Schmidt isn’t one to match up with the ideals of North Korea.

Read next: There was no startup scene in Jordan four years ago, but now it's thriving. Here's why...