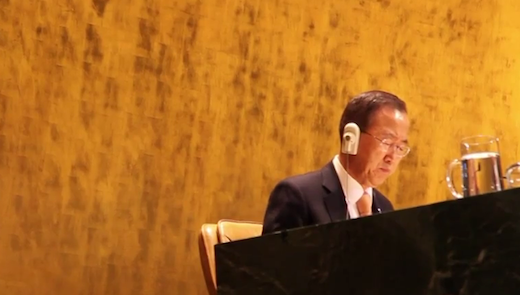 One of Google+’s most compelling feature is Hangouts, which is a group video chat of sorts that can be broadcasted live to a global audience. The feature has so far seen major adoption by big names, including US President Obama, Egyptian pop star Amr Diab and The Oscars.

From Dex Torricke-Barton of Global Communications & Public Affairs at Google:

We’re passionate about changing the world. But there’s another organization that’s equally passionate—and has been doing it a lot longer. For more than 60 years, the United Nations has worked to advance a global agenda on ending war and poverty, promoting human rights, protecting the environment and dealing with humanitarian crises—critical issues that will determine the quality of life for future generations to come.

It’s honestly great to see Google embracing important political figures as much as celebrities, because…you know…these people really do things that impact our world. Of course, some celebs certainly contribute to society, but that’s another debate right there.

You can expect the Google+ Hangout to be streamed live at 3:30pm ET on April 10 at the United Nation’s YouTube Page. David C. Drummond, Google’s SVP of Corporate Development and Chief Legal Officer, will moderate.

For more, check out how Google+ Hangouts first came to be. You may also want to see the G+ debate series that was announced last month.

Read next: EXEC raises 3k for Donor's Choose and fields over 50 calls during its first charity fundraiser