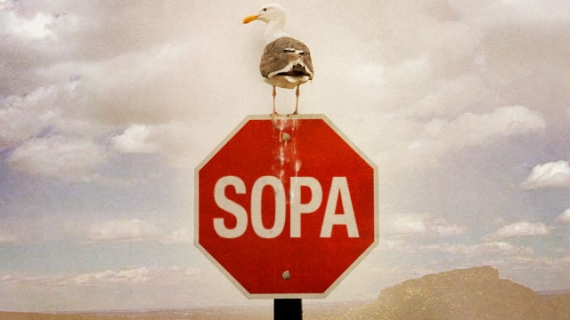 January 18 is here and a large number of businesses, brands and global technology giants are putting into place their actions to protest the SOPA and PIPA bills — one of them being Google.

Today, if you reside in the U.S and you access Google.com, the search giant has blacked out its logo in protest against the SOPA and PIPA, stating that it believes politicians should “end piracy, not liberty” as the bills would “cenesor the Internet and slow economic growth.”

Given that millions of people visit Google.com each day, Google is doing its best to ensure the message is delivered and its users are aware that their Internet freedoms are in jeopardy. To better explain the protest and the bills themselves, Google has added a link on its homepage (as we reported yesterday), to a landing page detailing what the acts (if passed) would mean to Internet users not only in the U.S but all over the world.

It also provides a form to allow visitors to sign the petition against the act.

Those outside the U.S will not see Google’s blacked-out logo, but they will be able to follow the link on the homepage to read more about its actions:

Google lists 67 other brands, businesses and websites that have taken action today, including Wikipedia, which has gone dark but allows users to access its site via their mobiles or by disabling JavaScript, Reddit and Mozilla — which have all chosen to protest in their own ways (some are already down, others are due to in a matter of hours).

Today, one thing is for sure — if you don’t care about SOPA or PIPA, you should probably stay off the Internet.

Read next: What SOPA means around the world - literally