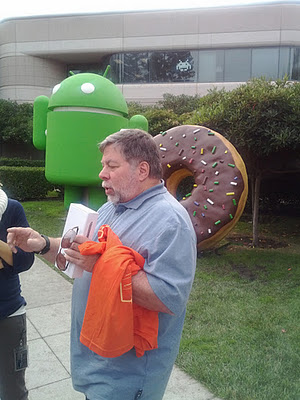 Apple co-creator Steve Wozniak is among the first to snag a Samsung Galaxy Nexus in the U.S., according to this post from Android browser developer Nicolas Roard and this one from Adam Powell. The image posted shows Woz getting handed his fresh new Nexus in front of Google’s Mountain View headquarters.

Just yesterday, Woz was on the hunt for a Galaxy Nexus at Best Buy. Apparently he decided to go to the source, or Google noticed that he was out for one and hooked him up.

In the background you can see the giant Android and donut from the past releases of the OS, as well as the new Ice Cream Sandwich from release 4.0. Wozniak is somewhat famous for loving mobile technology, no matter what company it comes from. He regularly camps out for the release of new iPhones, and is a fixture in lines with his Segway and sense of cheer.

So, get out there and found a company that will go on to change industries and eventually become the most valuable company in the world. Google will wait here with your new phone.

Read next: Google Search gets slight, but extremely useful tweaks for iPad