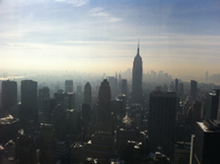 Google’s Offers platform launched with a pilot scheme in Portland, Oregon, following its announcement at the Google Wallet event in late May. Now it’s being rolled out further, with launches today in New York and the San Francisco Bay area.

As we reported at the time of its announcement, Offers is integrated with Google’s Wallet mobile payments system and sees deals delivered to your email inbox. In the future, location-based offers will be available too. This would mean that you may be shopping at a grocery store, choose an item in your shopping list using Google Wallet and be informed that there is a deal on that item in a popup notification.

Launch offers in two of America’s most tech-savvy cities include Belgian fries and mango chutney at Pommes Frites in New York and fresh donuts and apple fritters at Bob’s Donut & Pastry Shop in San Francisco.

Meanwhile, Google has updated its Shopper app for Android to support Google Offers with new ‘Today’s Offers’, ‘Nearby Offers’ and ‘My Offers’ sections.

Google is making a real play for Groupon’s turf with Offers. With its social Google+ service seeing rapid adoption, in addition to Offers being integrated with Google Places, the company is building a strong offering with potentially higher-visibility than Groupon can achieve. Of course, Offers is only available in three US cities for now, but if Google can scale the scheme effectively, it has a potential moneyspinner on its hands.