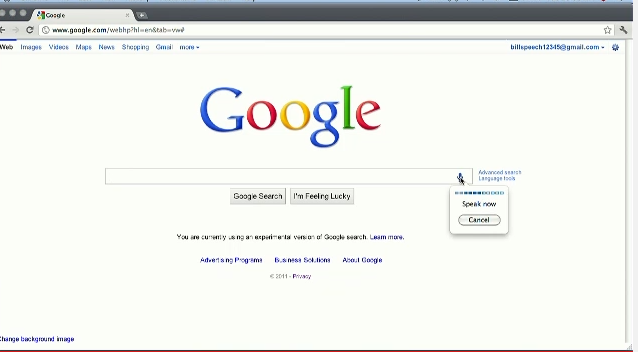 Google says that in the last year, the  volume of speech input has increased by a factor of 6. 2 years of non-stop speech goes through Google’s system every day.

Google says that it wants the accuracy of voice input to be seamless and they want to have it be everywhere. Every language, platform and device, in order to make it a ‘basic habit’ to use voice input. Google puts 230 billion words worth of data through their system in order to have it learn just enough English phrases to process voice queries in that language.

Google currently covers 2/3 of the worlds population with the various languages that its voice input system can recognize.

To help cover even more of the world’s population, Google is announcing Voice Search for desktop machines today.

Google also demonstrated the ability by using a popularly shared image to show that you can even search for an Internet meme simply by using one of the representative images.

You can search by image at images.google.com and the feature will be rolling out over the next few days to Chrome users. There are several ways that you can get an image into the search including Firefox and Chrome extensions as well as dragging an image into the bar when you see a camera icon. Google also mentioned in their Q&A that any images that you use will be treated like any other query and will not be collected and stored.

Read next: The Dot lets you capture 360 degree video with your iPhone 4