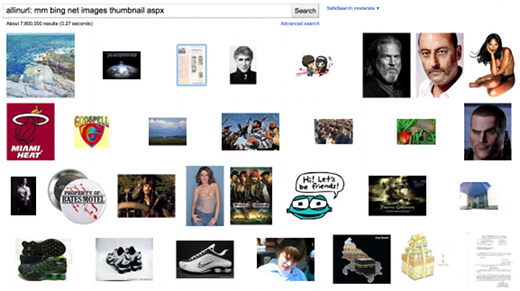 Google has been found to be indexing millions of image thumbnails from Microsoft’s Bing search engine, a little embarrassing seeing as Google accused Microsoft of copying its search results back in February this year.

Search Engine Roundtable reports on a discussion on the Google Webmaster Help forums, where a user flagged up that he had spotted the problem, explaining “I am not so sure that it’s a good idea to index the cache thumbnails of another image search engine. Do you think it would be a good idea if Bing was indexing all the thumbnail images from the google-image cache image database?”

“In addition, i don’t think that Google should encourage (or even allow) web pages to hotlink thumbnails from image-search cache,” he continued. “For image copyright owners, it is certainly not good to see Google doing that, because Google will be indexing copies of some copyrighted work, and giving some visibility to pages that hotlink those copied content, too.”

Indeed, if search engines index each other things could get very messy very quickly. Google’s Matt Cutts stated in 2007 that “In general, we’ve seen that users usually don’t want to see search results (or copies of websites via proxies) in their search results.”

To be fair, it doesn’t look like there’s anything untoward going on here. In the forum discussion, Google employee Gary Illyes promises to escalate the issue internally with the company, indicating that this may well be nothing more than an error.

That said, given the bitter war of words between the Google and Microsoft over alleged “copying” of search results, it’s a little odd to see the shoe on the other foot in this case.

UPDATE: As reader Excalbyte notes in the comments below, a search for Bing cached images now returns just a handful of results, indicating that Google appears to have resolved the issue.