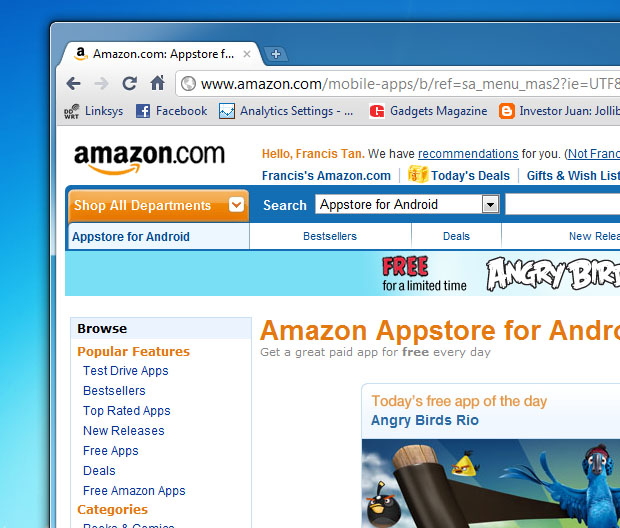 Amazon.com is entering the mobile app business with an Android application store that features Amazon’s unique recommendation algorithm, a paid app for free every day, and free app testing on the Web site before purchase.

The Amazon Appstore, which is accessible via Web and through a mobile app, is a potential iTunes equivalent for Android smartphones and tablets. Initially, users will have access to over 3,800 applications, including titles from Gameloft, Handmark and Glu Mobile. It even partnered with mobile game developer Rovio to launch its new Angry Birds Rio game exclusively on the Amazon Appstore.

People are already used to buying things through Amazon and its mobile apps, giving them the experience and credibility required to break into the mobile apps market. Naturally, Amazon is also enabling one-click purchasing for anyone with a credit card on file.

Unlike the Android Market, Amazon will review apps before they are sold. This works similarly to Apple’s App Store but with a more lenient approval process as Amazon “will only block an app if it doesn’t work or if it puts the customer’s data at risk,” Mr. Rubenson, category leader for the Appstore at Amazon, said.

Apple is already fighting back, with the Cupertino company suing Amazon for trademark infringement of the App Store name and unfair competition.