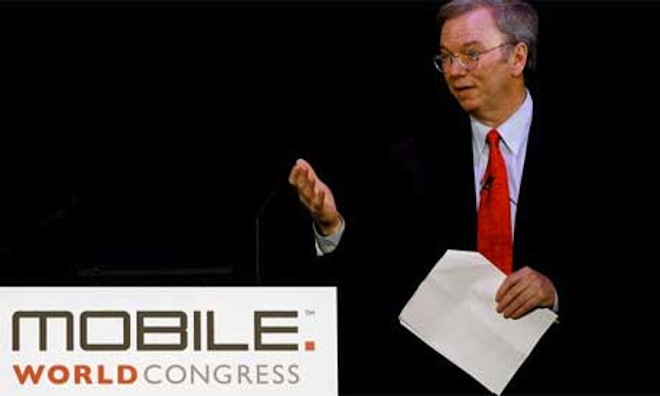 As we sat and watched Google CEO’s Eric Schmidt’s keynote for the Mobile World Congress, we were rather surprised. No, Schmidt didn’t admit anything that he shouldn’t have. In fact, he didn’t even say anything shocking. For that matter, he didn’t really admit or say much of anything.

One of our editors noted that perhaps Google was getting boring. Looking at Schmidt’s speech, it was as if someone cut up the portions of his 4 previous ones and then pasted them together in a different order than before. The small amount of chest-pounding that did exist during the speech was limited to only the things that we’ve heard Google talk about before.

But we think that the reality is more a matter of Google’s current transition period. With the impending CEO switch and the directions that we’ve already seen Larry Page taking in the past, Google is simply holding its cards close to its chest. For the past few years, Schmidt could stand up on stage and speak somewhat freely about Google’s direction and upcoming projects. As Page takes office, we’re willing to bet that the behind-the-scenes at Google have already had a good portion of the positions switched.

Mayer is doing Mobile, Schmidt is moving toward diversifying and expanding the platform and Page is at the helm. There are going to be a good number of shake-ups in the months to come, and our guess is that Schmidt’s lack of anything new to say is directly related to Page’s long-term plans.

Read next: Organise your Tweets with Keepstream