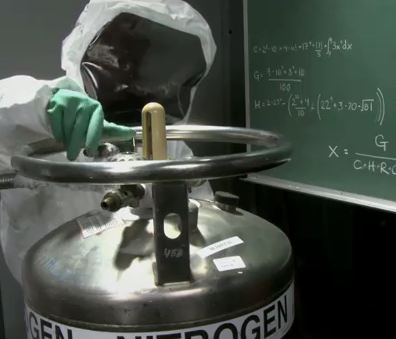 Oh Google, your hijinks are legendary. As the company is presently running a riddle-turned-scavenger hunt for the Nexus S phones, there was apparently another competition out there as well. One eagle-eyed Google fan, however, found the question that was never asked.

First off, if you haven’t watched the promotional videos for the Chrome OS, you should read this and then come back. In a more recent video, one of the Chrome UX designers walks you through what happens when your laptop gets destroyed (25 times) while you’re trying to work on something. The answer? Ideally nothing happens because all of your information is stored in the cloud.

However, what Sylvain Zimmer and a group of co-workers found more interesting was a specific part of the video:

Google being Google, that isn’t just a bunch of scribbling on the blackboard in the rear of the scene. Oh no, that’s an actual, solvable math problem. So Zimmer and his colleagues at Jamendo went to work.

After even more time spent and more beer consumed, it became clear that the 900.91 was only part of the equation, and in fact the rest of the equation turned into a URL, when matched with the corresponding numbers from the alphabet. That URL? http://goo.gl/speedanddestroy.

While the URL is now pointing only to a form that is no longer taking applications, the message it displayed at the time congratulated Zimmer for his work:

Zimmer filled in the form and is now awaiting the arrival of his notebook. The full story, in all of its epic glory, is available on Zimmer’s blog. Do stop by, give a read and let him know we said congratulations.