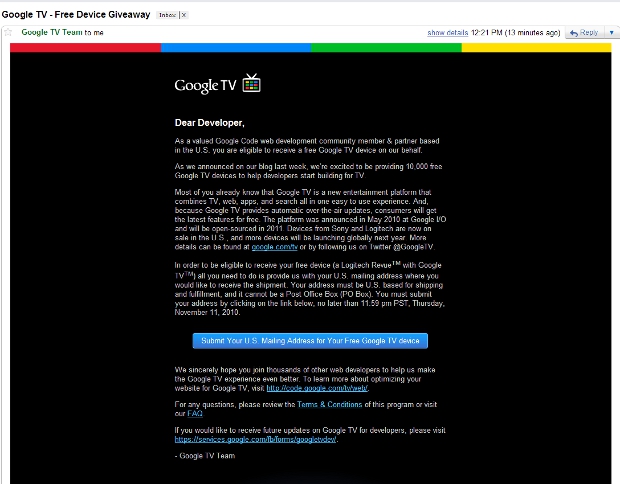 Google has emailed members of its Google Code community to let them know that they are eligible for a free Logitech Revue Google TV . We first reported that Google would be giving away the devices only last week, so apparently the Mountain View company is eager to get these out to developers as soon as possible (which is of course understandable). We’re not exactly sure (we are now, see the update below) if this is from the 2,500 that Google had a contest for or not, but the reported total number of devices Google plans to give away is 10,000 (which would be $3 million at retail prices):

UPDATE: Google got back to us to let us know that the emails below were sent out to its Google Code community (an unspecified number) and that it has not yet taken action on the 2,500 winners of the contest, which is what we thought this was at first. Google says that those winners will be determined according to the published rules of the contest. Also, the email below is separate from the 3,000 Google TVs Google will be sent to those developers that attended the Adobe Max conference.

It’s a simple three step process of email award, address and then confirmation. Developers have to submit their US addresses by November 11 to get their free Google TV, which will be shipped by Logitech 2-3 weeks after that by UPS ground – which means they’ll arrive a couple of weeks before Christmas. We’ll email Google for confirmation that all of the invites have gone out, but here’s the award email, followed by the confirmation screen: