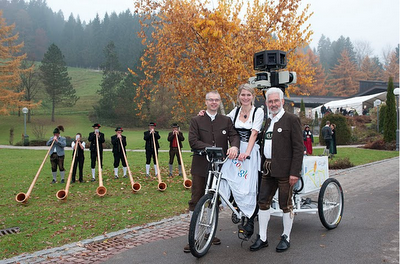 After a long bout of controversy about privacy – which was not helped by cars collecting WiFi data – Google today has launched its first city in Germany with Google Maps Street View, Oberstaufen.

Oberstaufen is the first of 20 cities (Germany’s largest) that will have Street View, and Google today also announced on its LatLong blog that it is offering a “special preview” of some “fascinating German places” and landmarks.

Germany has very strict privacy laws, and many Germans have been very against having their homes (not to mention their faces) show up on Google Street View. However, Google has worked hard to please both the German government and the German people and are pushing ahead with Street View starting today. In its post today, Google went to great lengths to say how welcoming Oberstaufen’s citizens have been:

For several months, the people of Oberstaufen, along with the mayor and the local tourist board have publicly invited us to put their town on the map so they can show it off to the world.

Hopefully for Google, moving forward Google will be able to avoid most of its privacy issues in Germany and Germans will start to find that the utility of Street View outweighs their privacy concerns.