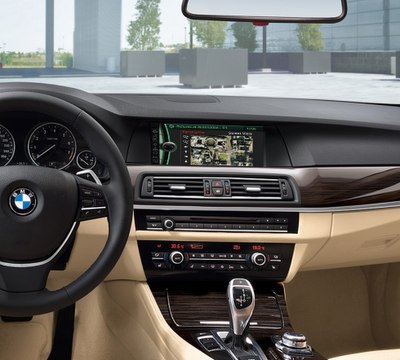 Google has renewed its navigation integration partnership with BMW in Europe, adding Google Local Search to all new BMWs starting this month.

As part of BMW’s ConnectedDrive car navigation system, Google Local Search allows drivers with the system in Germany, Austria, France, Italy and the UK (see note below) to receive local suggestions based on just a few characters entered (like Google search in a browser works) on the system’s pretty cool looking jog-wheel. Of course, the suggestions are based on the car’s location, and Google has also integrated a “pictures at your destination” feature that leverages Panoramio and Street View images to give drivers a sneak-peak at where they are going.

Google is really trying to be the winner in the lucrative auto navigation space – here is a video we took earlier this year of Google Earth integrated into an Audi. Of course, there are many other players in this space as well, but Google has both a cool factor and an extremely strong search edge to compete for driver’s attention.

Note: The post announcing this seems to point to BMWs offered in Europe, but it also says “BMW is introducing these services in every new car equipped with a professional navigation system as of September 2010,” without any mention of sales market, so we’ve emailed Google for clarification.

Read next: VLC for iPad Approved, We Take A Look [Screenshots]