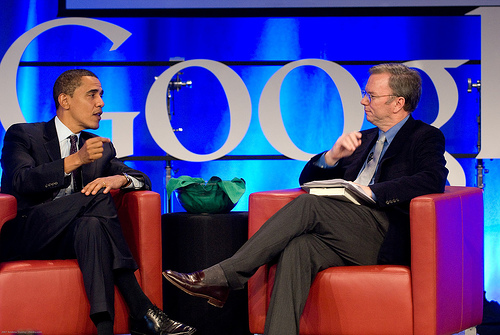 A few days ago, Google CEO Eric Schmidt did a rather candid interview that was covered on the Telegraph website in the UK. Somewhere along the way, the majority of the media seemed to have missed it, but there were some very key points about Google’s mindset on products, and mobile in particular.

Probably most notable of his quotes was the following:

“We don’t have a plan to beat Apple, that’s not how we operate.  We’re trying to do something different than Apple and the good news is that Apple is making that very easy.”

The statement, made in reference to the 2.2 version of Android being rolled out shortly after the launch of iPhone 4, opens quite a few doors about the inner workings of Google.  For one, as Schmidt is quick to point out, the business models are drastically different between the two companies.

Though Schmidt is also keen to point out that Google has been eyeing the mobile market for quite some time, and the market had only recently come to a point where it seemed logical for Google to strike.

And strike it has.  Google, it seems, is working its way toward a semantic experience not only for search but for its mobile market as well.  Schmidt points out that in the course of the next 5 years, the world will be consuming the majority of its content online.  That consumption, says Schmidt, will happen “on devices that are live not static. The characteristics of these devices are that they know who you are, they know where you are, they can play video and they carry memory.”

So then back to the subject of Apple making Google’s job easier.  The question, of course, is how this is fact.  The answer is deceptively simple, and one that we’ve talked about before:  Google is catering to a market that wants a more open platform.

The argument could be made, indeed, that Android is only open to an extent; that the approval process and release cycle puts it simply on par with iOS and not in a different class.  But the other end of that story is what you can do with Android once it’s in your own hands.  As Schmidt points out, you can modify it in any way that you want and that, it seems, is important enough to keep Android running strong.

What’s more?  In a statement that is sure to strike to the heart of Apple, Schmidt makes a quip about the development process for Android, and for Google products in general:

“All of our testing indicates that the vast majority of people are perfectly happy with our policy. And this message is the message that nobody wants to hear so let me say it again: the reality is we make decisions based on what the average user tells us and we do check. And the reason that you should trust us is that if we were to violate that trust people would move immediately to someone else.”

While this speaks volumes about how Google does business in general, it also shows a more human side of the giant.  Google seems to be acutely aware of the fact that the goal of keeping customers lies in keeping their trust.

Read next: The rogue developer's apps have been removed from the iTunes Store.