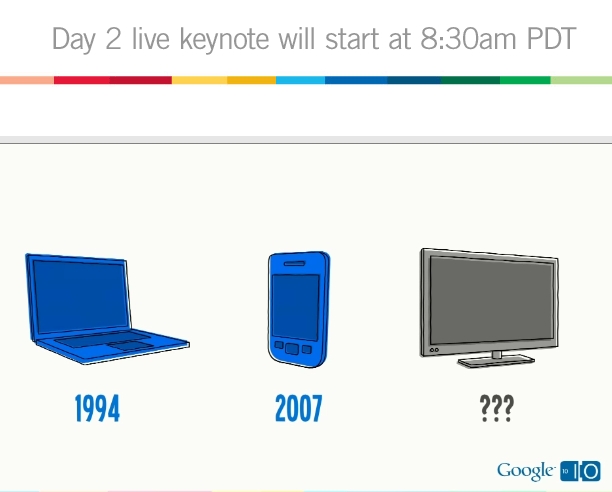 Google has now officially launched Google TV at Google I/O. Claiming that there is no better market for developers, the $70 billion dollar advertising market is now officially Google’s next target.

Google TV: TV Meets Web, Web Meets TV is the tagline for the service. Announced partners include Sony, Logitech, DishTV and Intel and the first Google TVs will be available in the fall of this year and will be available at Best Buy. You can watch a 2 minute video below from Google on the service). Here’s a custom-made interface built by the NBA for Google TV:

Saying, “video should be viewed on the biggest, brightest screen in the home” i.e. the TV, Google rolled out a large TV onto the stage at Google I/O.

The first thing that Google demoed is “the quick search box” which is meant to replace the standard TV program menu. So for instance, if you type in “30 Rock” or “MSNBC” you can find the program, go right to it, record to a DVR (if you have one) and also search for related videos on the web.

Search for “House” and Google TV shows you a nifty interface that shows where all of the (official) episodes are on the web including Fox.com and Hulu.com (however, licensing may be an issue with Hulu so it might not be included) as well as paid options such as buying the episode on Amazon (not iTunes of course, however).

Netflix integration has also been added into a very slick “home screen” that slides movies and shows (really, it looks like its optimized for a touch screen). Of course, Google TV also integrates YouTube and finds other videos across the web, including Sesame Street and WhiteHouse.gov.

Google TV allows for picture-in-picture so that people watching broadcast TV can keep the show on while searching on the web – however, they didn’t make it clear whether you can do the same thing if you are streaming a video from the web.

Another interesting announcement is an optimized version of YouTube for TVs called “YouTube Lean Back“, which will also be available on YouTube.com in a few weeks.

On stage, the demo required a keyboard and mouse, which could be a detractor for a lot of people (although they did say that they have a number of remote control hardware vendors working on this).

Hardware specs will include:  built on Android 2.1, uses Chrome as the browser, Flash 10.1 is included, WiFi and ethernet built in, HDMI connection and a strong processor, a special protocol between DishTV and Google TV, surround sound and HD everything.

Perhaps one of the biggest part of this announcement is that Android phones can be used to control Google TV with voice activation as well choosing something your watching on your phone and then over WiFi getting it to work on the TV. Google will make release a developer kit for developers to build their own remote control apps.

Google TV also can run mobile Android apps that do not require mobile hardware (phone calls, SMS, etc). Google will offer an SDK, include them TV apps in the Android Store and provide Web TV APIs in “early 2011” and will open source the code in the summer of 2011.

Read next: Huge New Tweetdeck Update is Out