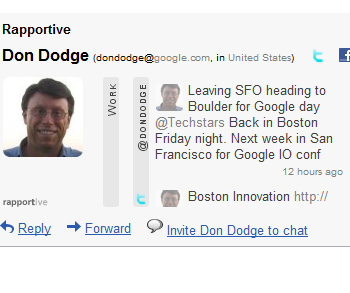 The Google Apps Marketplace has enabled contextual gadgets for third party developers, and a number of companies trying to own a contextual layer for business users of Gmail have built gadgets for the launch.

Here’s how contextual gadgets in Gmail works: an Apps user (mostly businesses/corporations) turns on the gadget through their account (if the gadget comes as an additional cost, then the user would go through a payment process first) and then the gadget is enabled throughout the account.

This means that one IT administrator could turn on the gadget in Gmail for all employees (currently there is no user-level controls, so if the admin turns it on for everyone, employees can’t turn it off, but we’re assuming Google will add that functionality at some point). The gadgets would then display info right inside the email, just as right now links to YouTube videos in Gmail shows up right in the body of the email as gadget.

As we said, we have confirmation of at least three companies that have gadgets ready for the launch: Rapportive and Gist.

Rapportive was already quickly gaining a strong following among regular Gmail users with its contextual info through browser plugins (and their Raplets developer platform that they launched at The Next Conference 2010) and we anticipate their Apps Marketplace gadget to be highly successful as well.

One of things that many in the tech world like about Rapportive is its integration with Crunchbase profiles. That said, Rapportive CEO Rahul Vohra wants to go beyond that, “As we continue to build on the Google Apps Marketplace, we will integrate existing CRMs, helpdesks, email marketing systems and user feedback tools, allowing people to run their entire business from Gmail.”

Rapportive is offering their gadget for free in the Apps Marketplace.

Another entrant is Gist, which “constantly generates updates for individual and company profiles with the latest from social networks like Facebook and Twitter, over 20 million blogs, and over 50,000 news sources.”

“By adding Gist to the Gmail experience, business users benefit from having actionable information at their fingertips without the additional effort required to get it by essentially doing an automated Google Search,” said Seattle-based Gist CEO T.A. McCann.

Another entrant is Kwaga and we also contacted etacts and Xobni for comment, but they have not yet responded whether they are launching gadgets or not.

Read next: Cat got caught in the act (NSFW)