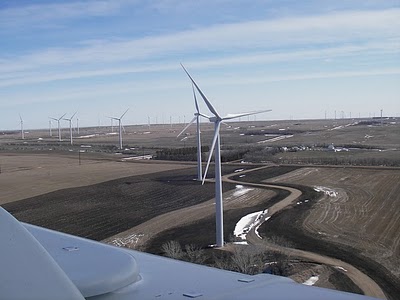 With a horrific oil leak poisoning the Gulf, energy independence from hydrocarbons has never looked more appealing. Google agrees, and putting their money with their PR is has invested 38.8 million dollars into wind power.

The investment is in North Dakota, which is noted for its steady, strong winds that are well adapted for wind power harvesting. Google says that for clean energy to advance in the world, and especially in the United States three things are required: effective policy, innovative technology and smart capital. Google has both money and influence, so their advocacy into the issue is serious, and carries weight.

Google’s goal with its investment is to “accelerate the deployment of the latest clean energy technology while providing attractive returns to Google.” Hard to complain with that, Google is using their philanthropic division and their bank account to help promote and build the future of clean energy.

The wind farms themselves that Google has invested in include some 113 turbines that can power up to 55,000 houses. While it is a small step, it represents an appetite from Google to speed along the progress of renewable energy.

Google itself is a voracious consumer of power around the world, with its many server farms and large campuses pulling hard on electrical grids in many large countries. That Google would want to invest in ways to generate that power in a better fashion speaks to a culture of corporate environmentalism that is rare.

After the oil leak became a serious problem, and its potential damage became known one smart commentator noted that wind spills tend to have less deleterious impacts on their local environment. If Google follows up this first investment into wind with more in the Dakotas, perhaps they can lead other giant corporations into similar actions and create a serious push by corporate America to change our energy plan.

Read next: Cleverbot Does Not Find You Humorous