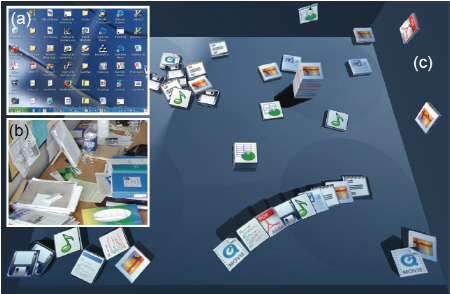 Another feature of the Chrome or Android OS?  Might very well be.

The Wellington Financial Blog is reporting that Google has acquired BumpTop for an as yet undisclosed amount, but the guess is around $40 million.

BumpTop is a desktop replacement that aims to replicate a real world desktop, where items are organized in a more haphazard fashion as opposed to snapping to unseen grids.

The project started as the Master’s Thesis of Anand Agarawala who is now the company’s owner.  The company got VC and angel funding in 2007, with Wellington postulating that the company has received $2-3 million of funding so far.

With such a short life span (BumpTop was only released to the public in January of this year) it leaves a lot of doors open for Google to acquire an idea and then capitalize on it, without leaving too many current users in the dark.  However, BumpTop Pro users are being promised end-of-life support for the original product.

Until now, BumpTop has been available for download, but the company has posted an entry to its site just yesterday that warns of a change of direction, and a limited amount of time left to grab the application.

For now, if you’d still like to experience BumpTop as is, you can grab a copy from their site.

Read next: One of the loveliest adverts you will have ever seen.