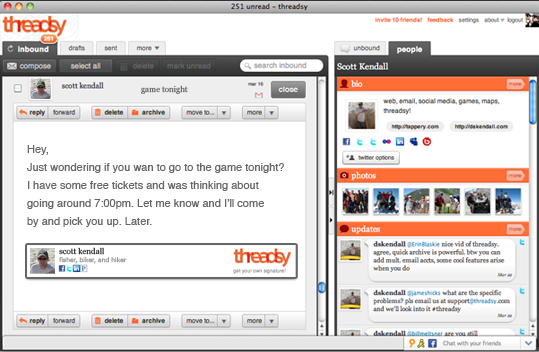 For those of us who are addicted to being 10 places at once, Threadsy is a life saver.  The service will pull all of your social feeds into one clean dashboard that you can customize.

The site has just announced that it is taking security and sharing one step further by being the first to implement Gmail’s OAuth access.

In case you missed it, OAuth is a secure way to allow a site to have access to your Gmail account, without ever having to give out your password.  The OAuth standard for Gmail was just announced barely 2 weeks ago, so Threadsy is taking the lead at a fever pace.

For the rest of the world, Threadsy is keeping its eyes open to new implementations of OAuth, but still maintaining secure information transfer in the mean time.  Yahoo is said to be the next to implement the service, and Threadsy is ready to pick it up if and when that happens.

There are a few steps that new and existing users will need to take in order to grant access for Threadsy to your Gmail, but it’s all really well documented on the Threadsy Blog.

We’re sure to see many more sites implementing OAuth in the near future.  But for now, a big congratulations goes out to Threadsy for leading the charge.

Read next: Seesmic for Android gets an update. New features abound.