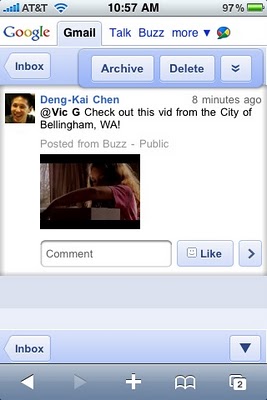 When Buzz first launched, it came in a few varieties for users to get started with. One of these was the dedicated mobile version at buzz.google.com.

Google has now replicated the regular non-mobile, Buzz-in-Gmail experience on the mobile Gmail interface. Less confusion, more Buzz, if you thought that was possible.

While this is not likely to revolutionize Buzz usage, it surely cannot hurt Buzz adoption among Gmail’s millions of users. Buzz does need more than a mobile integration upgrade to even begin to find growth levels sufficient to make it a social powerhouse, if that is what Google even wants.

I have, like millions of other Gmail users, come to ignore the 100+ Buzz tab in Gmail every day. At least for me, having it baked into a mobile version of Gmail (that I never use), does not change anything.

Still, incremental feature upgrades in the long run do a great product make. Will anyone be around to use it?

Read next: Apple: Yes, The iPad Has WiFi Issues, Here Are Some Tips