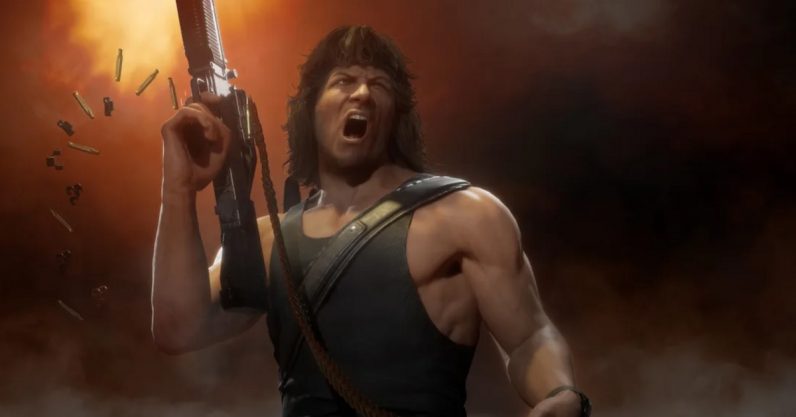 NetherRealm Studios today announced the next round of DLC for Mortal Kombat 11, which means more characters — oh, excuse me, “kharacters.” The headliner of the new three-character pack is undoubtedly John Rambo, voiced by Sylvester Stallone himself, and yet he’s not the one fans are losing their minds over.

The trailer depicts three newcomers to the fight, as is usual for the developer. The kombatants are Rambo, circa First Blood and wielding a wicked minigun; Rain, a longtime recurring character best described as “the purple ninja;” and Mileena, the toothy clone of Kitana who’s become a beloved fighter in her own right.

Now you’d think Rambo would be the selling point — the character was not one of those leaked ahead of time, so he’s about as close to out of the blue as these things go. Everyone was expecting Ash Williams, who I wouldn’t completely rule out. Rambo’s voiced by good old Sylvester Stallone himself, who I hope got a pretty penny to shout down a mic for a few hours. He looks pretty awesome, not going to lie. I’m not sure how I feel about watching Rambo get sliced and diced by the other characters — I prefer watching him do the killing, personally. But still, I’m not going to say no to giving Stallone some work. Just to recap, he’s now joined the likes of Terminator, Robocop, and Spawn as guest fighters.

“For the last time, Mileena is NOT koming to MK11”
– Ed Boonpic.twitter.com/uhupzSfejO

On any other day, Rambo would be the headliner, and he probably still is to most, but he’s being somewhat overshadowed right now by another character with whom he shares a trailer. It’s Mileena fans have been dying to see — or at least, a particular stripe of fan has. They’ve been asking for her very publicly and persistently since the game was released 18 moths ago. Series creator Ed Boon could probably have tweeted the sonogram of his unborn child and Mileena fans would have flooded the responses with pleas for him to put her in the game.

MILEENA IS BACK AND I'M STILL CRYING OVER HERE pic.twitter.com/L1aNC1kJe3

I’m not saying she was put in the game for that reason — she’s a kharacter of long-standing who has ties to the likes of Shao Kahn, Kitana, Sindel, Kotal Kahn, and D’Vorah, so her inclusion is natural. That said, you’d be forgiven for thinking Boon and NetherRealm just did it to appease fans.

But enough about Mileena — the biggest news in the announcement is that NetherRealm is releasing Mortal Kombat 11: Ultimate Edition, and every player who’s playing on a current-generation console will get a free upgrade to the next-gen consoles coming out in November. Xbox One players will get a free upgrade to Xbox Series through the Smart Delivery system, while PS4 players have a free upgrade to PS5 included. I’m pleased I’ll get to play some more MK11, as there haven’t been very many new fighting games this year — there have been some good ones, but it’s nice to return to MK‘s warm, bloody arms. Honestly, given how well the game still seems to be doing, I’m not surprised AT&T decided publisher WB Games was too valuable to sell.