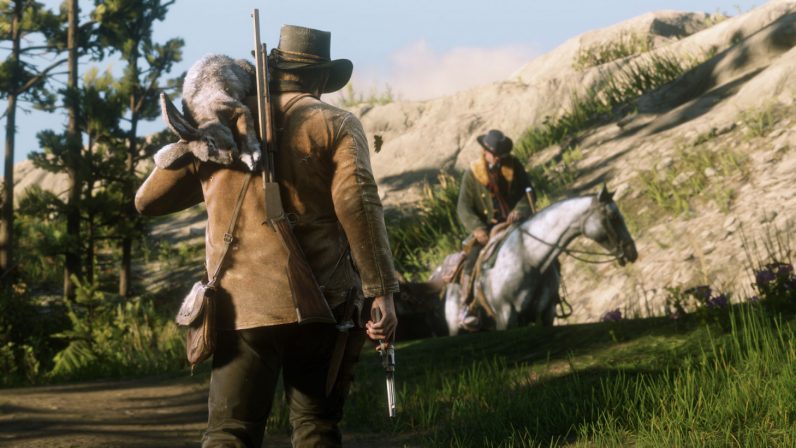 I was fortunate enough to get my hands on an advance copy of Red Dead Redemption 2. Yes, I know I’m a lucky bastard.

You can read what I thought about Rockstar’s latest here, lets just say I enjoyed it a lot.

Like any other big open world game, there are a ton of ways to make your own fun. The game does a great job of holding you by your hand in the early parts, until you’ve gathered enough knowledge about its systems to enjoy yourself unaided.

There are a bunch of little things I wish I had known before I got started though. Here’s a list of nine tips to make your time with this phenomenal game even better.

1. Hold the ‘start’ button to quickly open the map

I don’t know how many hours I’ve sunk into Red Dead Redemption 2 before I realized this but you can quickly open the map by holding down the start button. That’s the one labelled ‘options’ on the PS4 and ‘menu’ on the Xbox One. It saves you exactly one button press, but it’s such a game changer.

Keeping your hideout stuffed with food, ammo, and healing items is a big mechanic in Red Dead Redemption 2 – but it can become overwhelming quickly. Your gang is needy and you can easily spend a good chunk of your time hauling back meat and other items back to your camp, distracting you from your main mission.

Don’t worry about this too much. Especially in the beginning it’s not worth the effort and the gang will be totally fine without you. One red icon isn’t going to make your gang hate you and, so far, the effects of neglect have been minor. Go enjoy the game, your buddies will survive.

Sure, the game reminds you every time the protagonist writes in it, but it’s easily overlooked and that’s a bummer.

Arthur draws gorgeous illustrations and regularly jots down his thoughts, giving you a bit of insight into the brooding outlaw’s psyche. When I remembered I had that thing in my pocket after 20 hours of playing, I had a lot of catching up to do. You read the journal by holding your d-pad to the left for a couple of seconds and I highly recommend doing so every now and then. It’s really adds depth to the game.

4. Do your challenges on the go

Like its predecessor, Red Dead Redemption 2 has special challenges for the bulk of its activities. You know, like a sharpshooter challenge to ‘get 3 perfect rabbit pelts,’ or a hunting one, such as ‘shoot 5 birds from a moving train.’

Most of these can be completed on your way to and from the various waypoints the story has you visiting. So use those long horse rides to knock out a few of those challenges. Two birds, one stone, and all that.

5. Get your fast travel on

Unlike its predecessor, Red Dead Redemption 2 doesn’t have as many options to skip those aforementioned horse rides. In the first game you could just put down your camp anywhere and hit the fast travel button, but RDR2 doesn’t have anything of the sort. It does still have the stage coaches and trains system from the first game to warp you from the major towns, but you don’t have those options in your gang’s hideout. Initially.

It took me a while to figure out, but you can upgrade certain aspect of your gang hideout, with the ledger next to Dutch’s tent. One of those options is to upgrade Dutch’s dwelling ($220). Once you’ve bought that, you get the option to upgrade your own tent ($325), which comes with a map that allows you to fast travel to a bunch of points. This is a life saver as the camp is relatively remote and being able to skip those long horse rides is a welcome option.

This might sound dumb, but trust me: be careful where you walk. Red Dead Redemption 2‘s physics engine is very realistic and accidents are bound to happen. Whether you’re on horseback or on foot, you can easily slip and fall while scaling a steep hill, resulting in your untimely death. It happened an embarrassing amount of times when I was writing my review, don’t repeat my mistakes.

7. You can use your lasso to capture animals

One of the earlier missions in the game teaches you the rules of hunting. It’s a painstakingly slow process of tracking an animal, until you find the right spot to shoot an arrow or bullet through their brain. I found it way easier to just mount my horse and use my lasso to capture a deer.

Just ride up to them, aim your lasso, let it loose, and use and use your knife to do the rest. No more stalking around tall grass for hours on end.

Red Dead Redemption 2 has a lot of shiny things to spend your hard-earned cash on, and just as many ways to make a buck. Don’t worry too much about the latter. As you progress through the story, you’ll get plenty of cash just by doing missions. Don’t go out of your way to keep your wallet filled, you’ll make plenty of dough as you go through the motions.

9. Check pelt quality with your binoculars

Different animals have different pelt qualities. A three star pelt will earn you way more money than a one-star pelt. Also, certain crafting recipes require the three-star pelts. You can easily check what kind of pelt an animal has by looking through your binoculars. If you see a herd of deer walking around, take out your binoculars, and target the one with the three-star pelt. Ignore the rest, focus on the perfect-pelt-bambi and thank me later.

That’s it. Go have fun. And I hope you booked some time off work – you’ll need it.