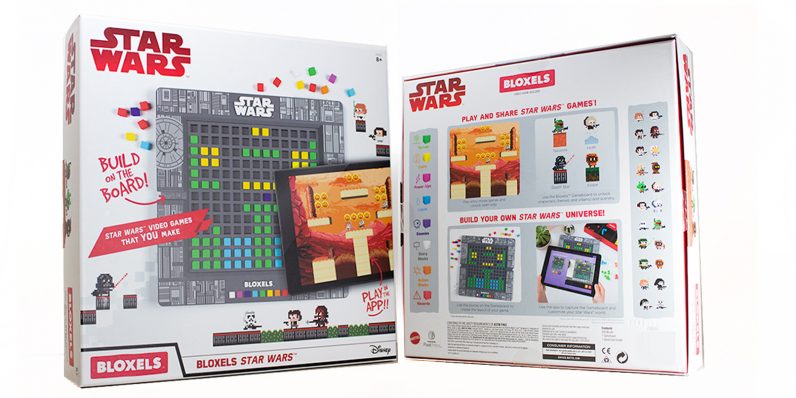 Mattel today released Star Wars Bloxels, a set of building blocks used in conjunction with an app to create your own video games. While technically a toy for ages eight and up, Bloxels are a blast to play with, and they really shine as a teaching tool for aspiring young programmers.

With Star Wars Bloxels you get a plastic board and 320 colored plastic cubes. Players or their parents download an app on an Android, iOS, or Amazon device and capture the game board using their camera.

Each colored block corresponds to a specific game world feature, for example white blocks are “story” blocks and green blocks are terrain. It takes seconds to drop in the blocks you want, take a picture, and then choose how the blocks will function by accessing them in the app.

Once you’ve decided where the floor, enemies, traps, or coins will go on the board, and created an image in the app, you can test your creation by playing it. Creators can also share their creations through an in-app ‘Play and Share’ area.

In my time with the app I tested out some clever levels created by other players. I even stumbled across an environment that was as enchanting as it was horrific called “Ewok Cage Match,” which was created entirely by a member of the community, and had me killing flying Ewoks with a light saber. Yes, flying Ewoks – with wings and everything.

The app itself is clean, easy to use, and simple enough for a child to understand. It’s also a lot of fun. The story mode features game worlds with unlockables that are played with one of two related characters. For the Mos Eisley level you choose from either Han Solo or Greedo, for example.

Star Wars Bloxels, the video game, is represented as a nifty little two-button platformer. Characters like Boba Fett have blasters that allow them to attack from ranged while saber-wielding characters attack from melee and deal more damage.

The bulk of game play is spent avoiding obstacles, collecting coins, and traversing the levels through mastery of each character’s jumping abilities. It’s not a particularly robust game, but as a platformer it’s fun to play even if you leave your Bloxels game board at home. Plus the sound effects are fantastic and the graphics are right inline with games like “Terraria” and “Minecraft.”

In order to truly uncover the fun of Bloxels you’ll need a creative spirit. Creating your own games is easy, the app does all the hard work. I found myself furiously creating rooms to see what kind of sequences I could come up with for my main character (Luke Skywalker, of course) to play through.

There’s no programming or code involved, but in order to create something playable children (and adults) will have to understand the basics of linear planning, cause and effect, and logical progression. Bloxels allows you to visualize your work before you’re stuck looking at a screen.

As much as Legos inspire budding young architects and engineers, Bloxels is a toy for future computer programmers. It’s definitely a gift I’d buy for kids who want to create video games when they grow up.

The quality of Star Wars Bloxels is incredible, Mattel and Pixel Press don’t skimp anywhere. Everything about the packaging of the physical product and the design of the app is appealing and well-crafted.

With the holidays and a new Star Wars movie coming up I highly recommend putting this on your shopping list for kids who are into STEM toys. You don’t even have to tell them it’s a learning toy, they’ll have fun with it no matter what.

Read next: Storytime with Boris: How to use jackets