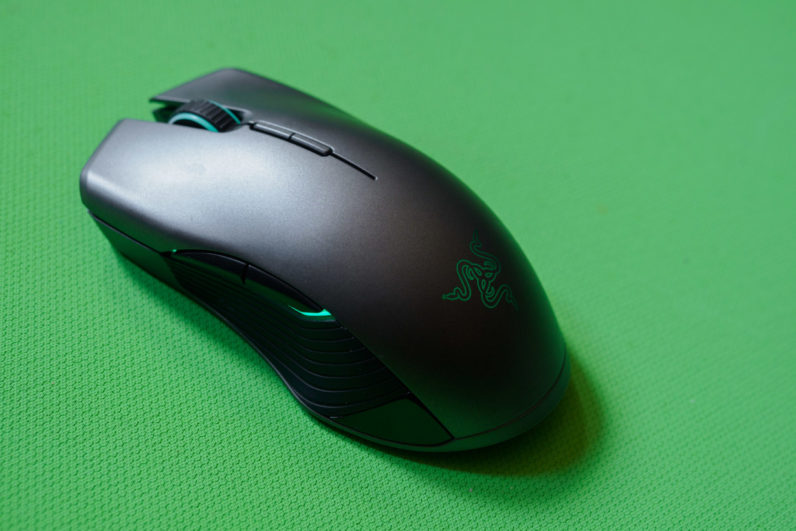 Before Razer started selling laptops and headphones, it made gaming mice. Though it still makes some of the most popular mice out there, that market has become much more crowded in the past few years as a plethora of competitors have entered the field.

Its newest mouse, the Lancehead, aims to put it ahead of the pack again. It’s the company’s first new mouse shape in some time and it comes in two versions. The standard Lancehead is wireless, costs $140(!) and comes in a gunmetal finish – though you can use it wired if you prefer. The Lancehead ‘Tournament Edition’ comes in at a more palatable $80, comes in black or white, and is only available wired.

The more important difference is in the sensor technology: the wireless model uses a laser sensor, while the Tournament Edition uses an optical one. Depending on your skill level and priorities, that difference is either inconsequential or baffling – but we’ll get to that in a bit. Keep in mind I was only able to test the wireless version.

Wireless mice have basically sucked for high-level gameplay until Logitech came around with the G900 (and the subsequent G403 Wireless, which uses the same technology). The G900 has been my daily driver for over a year, and I cannot detect a difference between wired and wireless mode; if anything, I play better in wireless mode thanks to the freedom afforded by removing the cable.

Granted, I’m no pro, but I have been playing Counter-Strike at varying levels of dedication for over 10 years and am extremely picky about my mice. More important is the fact that the G403 Wireless has seen some adoption by top-level players in the competitive gaming community of late.

The Lancehead is Razer’s shot across the bow, and it mostly presents a strong challenge – with one major caveat.

First off, I really like the Lancehead’s ambidextrous shape. Mice are extremely subjective, with preferences varying by hand-size, grip style, and whim. I use something between a palm and claw grip, and the Lancehead works great for me – I prefer the shape slightly to the G900,. Some people might not like the way the mouse flares on the back, but I find it gives my finger’s a good spot to rest.

The primary buttons are clicky and have subtle comfort grooves. The side buttons are smaller than I’d like, but easy enough to access. The scroll has well-defined steps without being stiff, although I miss the ability to tilt it side-to-side from the G900 (some people hate this, so your mileage may vary).

On the software front, Razer’s Synapse gives you a huge level of customizability, and I appreciate how it saves your configuration in the cloud; I switch between my desktop, laptop, and review units all the time, so the syncing feature comes in handy.

And of course, it’s Razer, so you have a myriad of colors to choose from in terms of lighting. Razer does RGB lighting the best in my experience, and that extends here. The shifting hues outlining the sides of the mouse and scroll wheel look awesome, and classier than I expected.

But you’re here for the gaming performance. Like I said before, it depends on how picky you are.

First, the good: Wireless performance is great. Despite the fact that Razer uses a 2.4 Ghz connection and that I have literally dozens of devices operating on similar frequencies in my small studio apartment, I was not able to detect any significant difference while playing wired or wirelessly. As far as I can tell Razer’s technology seems to be on par with Logitech’s now.

The not so good: Razer went with a laser sensor on the wireless version of the mouse, instead of the optical one used in the Tournament Edition. It’s fairly common knowledge among the gaming community that laser sensors are inferior to optical. I’d hoped Razer had worked some magic, but alas, that was not the case.

Anecdotally, despite the fact that I actually preferred the Lancehead’s shape to the G900, I played a little worse with it. As with most laser sensors, it struggled with tiny, pixel-by pixel adjustments – even using Razer’s own Gigantus mouse pad – which makes sniping more difficult. Meanwhile, a small degree of acceleration complicated making quick, short movements. For a more technical breakdown, this video does a great job of showcasing the same problems I found.

But the biggest evidence that the laser sensor is inferior to the optical one comes from Razer itself: there’s a reason the wired-only Tournament Edition uses an optical sensor. Specifically, that’s the Pixart PMW3389, which is the same family of sensor used in some of the world’s best mice.

My guess is that Razer knows high-level gamers don’t trust wireless mice, so it put its best sensor in the Tournament Edition. For everyone else, Razer seems to have thought “well, these people won’t notice the difference anyway.”

And I mostly agree. For all my complaints, I can’t stress enough that unless you’re playing at a pretty high level, or generally obsess about the minutae of mouse performance over practical features, you’re not going to tell a difference. If you’re coming from almost any other wireless mouse – and even most other wired mice – the Lancehead will feel revelatory. And ultimately, I’ll take the faultless wireless over a mouse with a better sensor and a splotchy connection.

Still, compared against the very best in the game, the Lancehead is a step behind. Razer chose to compromise, when all it had to do was put its best sensor in the Lancehead to have a tournament-viable option. It may not be an issue for you, but at $140, I find that compromise a little too hard to swallow.